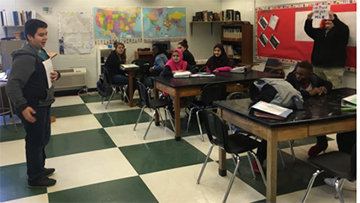 Kevin Mournighan’s eighth-grade Georgia studies class at Furlow Charter School was recently studying the social injustices that occurred during the New South era in the late 19th and early 20th centuries. These injustices were the Jim Crow laws (laws that legalized segregation), the Leo Frank Case (where a Jewish man was lynched by a mob for a crime that he may not have committed), and Women’s Suffrage (their right to vote). In order to help scholars appreciate these issues, mini town hall meetings were held on each topic. All scholars had to prepare a short statement regarding one of these issues and present it to the class. Scholars were also encouraged to make signs in support of or against these issues, just like you would see at a real town hall meeting. Here, Juan Gonzalez makes a presentation to the class, while Tori Dukes stands in the back with a sign supporting her cause.