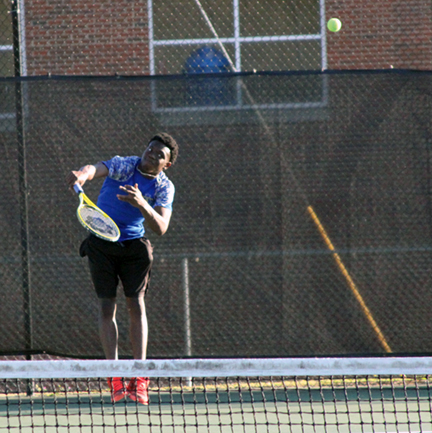 MICHAEL MURRAY I ATR: ASHS’ Sage Finch fires off a serve to his opponent during an early-season match in Americus. Finch bested his Shaw competitor, winning both of his matches on March 14 in Americus.

In spite of a few unfortunate rain delays, the Americus-Sumter High School tennis teams kept their spirits high enough to take down visiting Region 1-AAAA foes, the Shaw Raiders and Lady Raiders on March 14 in Americus.
The Panthers and Lady Panthers traveled to Columbus on March 16 to take on their Northside High School counterparts. The Panthers took a narrow 3-2 loss in the match-up.
ASHS’ streak of bad luck continued on March 18 when the Panthers took on Miller County and Lee County, dropping 3-2 and 4-1 decisions, respectively. As of press time, the Panthers are 4-4 overall and 2-1 in Region 1-AAAA.
The Lady Panthers’ results from the past three matches were not available at press time.
The ASHS ladies won their contests against Shaw by a margin of 4-1 on March 14 and the ASHS boys took a 3-2 victory over the Raiders in the home meet.
ASHS’ Kahria Hadley kicked off the action with a pair of defeats (6-2 and 6-1) of Shaw’s Gabby Tusker. ASHS’ Bailey Roberson followed suit after drawing in her initial two matches against Shaw’s Sydney Morgan. Roberson went on to win the tiebreaker 10-8.
The Lady Panthers’ final singles competitor, Hannah Martinez, swept her opponent, Pearl Brown, in both matches, 6-5 and 6-1.
In doubles action, the ASHS duo of Wynter Pritchard and Jovan Sykes managed to hold their Shaw opponents to a tie in their initial two matches, but eventually fell 7-4 in the tiebreaker. The ASHS doubles team of Kirby Perry and Israel Broomfield took down their visiting opponents, 6-3 and 6-2 to secure the win for the Lady Panthers.
In ASHS boys’ action, the Panthers took a 3-2 win over the Raiders, completing the sweep for the ASHS teams. 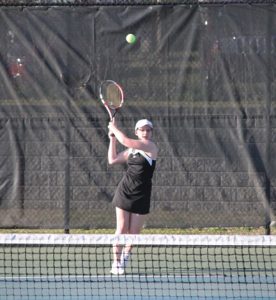 MICHAEL MURRAY I ATR:
ASHS’ Bailey Roberson returns a volley during a meet in Americus. Roberson won in a tiebreaker against a Shaw foe on March 14.

Americus leadoff singles player, Joseph Ndaayezwi, dropped a decision to Shaw’s number-one player, Steven Broom. ASHS’ Sage Finch made up for lost ground with 6-2 and 6-1 defeats of Shaw’s Jason Cho, and Trey Dowell completed the singles’ bracket after taking a defeat at the hands of Shaw’s Yu Jun Kim.
In ASHs doubles action, the ASHS duo of John Michael Martinez and Reggie Watters took down their Shaw counterparts 6-1 and 6-0. ASHS’ Aaron-John Ndaayezwi and Braxton Cross secured the home win with 6-4 and 6-0 wins over their Shaw rivals.
ASHS’ tennis teams hosted Westover on March 21. The results of this meeting were not available at press time. The Panthers and Lady Panthers will travel to Cairo on March 23 to face Cairo High School.