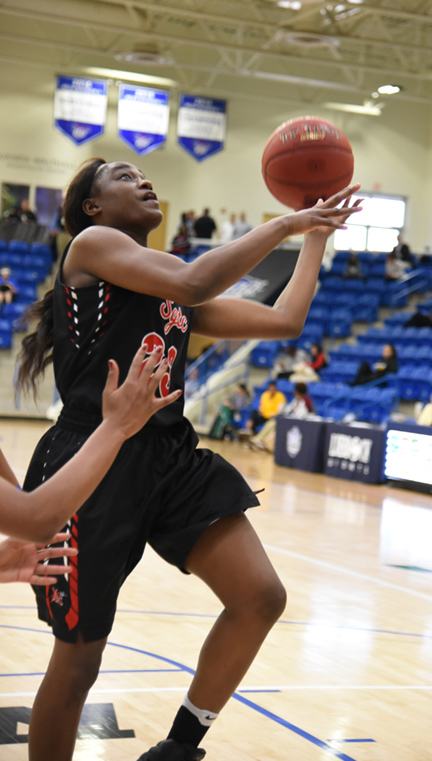 LUBBOCK, Texas –  The South Georgia Technical College (SGTC) Lady Jets went toe to toe with the second-ranked junior college women’s basketball team in the nation for 20 minutes in the sweet sixteen round of the National Junior College Athletic Association (NJCAA) Division I women’s national basketball tournament in Lubbock, TX on March 21. The Lady Wranglers from Odessa, Texas used a 17-4 run in the third quarter to capture a 58-44 victory and the opportunity to move into the Elite Eight round.

“We didn’t play very well tonight, but I am still very proud of these young ladies,” SGTC Athletic Director and Lady Jets head coach, James Frey. “We had way too many turnovers and we didn’t shoot the ball well but we were still tied at 21-21 at the end of the first half. The girls did not quit and we pulled within nine points late in the game but couldn’t close the deal.”

Odessa College scored first and pulled ahead by as many as six points in the first quarter before the Lady Jets cut the lead to 10-8 at the end of 10 minutes. The Lady Jets went on a 9-2 run in the second quarter to tie the game at 21-21 at the half.

The Lady Wranglers dominated the third quarter and outscored South Georgia Tech 20-6 to go up 41-27. Odessa widened the lead to 19 points before the Lady Jets came back and pulled within 14 points, falling 58-44.

The Lady Jets only shot 38 percent from the field and hit one of 10 three-point shots. They also only hit 45 percent of their free throws. Despite those stats, the real killer was turnovers. The Lady Jets had 28 turnovers and allowed Odessa to score 21 points on those.

Freshman forward, Esther Adenike, had four points and nine rebounds. Kanna Suzuki and Sceret Ethridge closed out the scoring with two points each.

Despite the loss to the Lady Wranglers, the Lady Jets finished the 2016-17 season with an impressive 30-5 overall record. That record allowed the Lady Jets to tie the 2014-15 Lady Jets squad for having the best record in the history of either of the SGTC basketball teams.

“If you had told me that we would finish up in the sweet sixteen round of the national tournament and 30-5 on the season after we lost three of our top sophomore starters late in the season, I am not sure that I would have believed you,” said Frey. “But that is what we did with just three sophomores and six freshmen. That is a testament to this group of young ladies. When one player went down, another one stepped up. And they did this over and over again. I am very proud of what they accomplished.”

Coach Frey and the Lady Jets would have liked to advance to the next round and earn the right to compete for the national tournament title, but the Lady Jets finished the year winning 18 of their last 20 games and securing their second consecutive GCAA regular season title, winning the NJCAA Region XVII tournament, and becoming the NJCAA District J champions.

Corbin and Coleman were both named to the GCAA first team All-Conference team. Fluellyn earned second team GCAA All-Conference status and then earned the MVP title for the NJCAA Region XVII tournament.  Adenike was also named to the All-Tournament team and Suzuki was selected as the GCAA Freshman of the Year.

Assistant Coach, Kenzia Conyers, has been with Coach Frey and the Lady Jets for the past four years. She has been a part of each of the Lady Jets’ three trips to the national tournament. Her assistant coaching record at South Georgia Tech is 115-23.