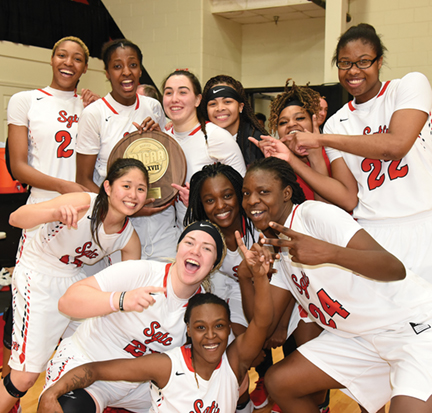 SUBMITTED BY SOUTH GEORGIA TECHNICAL COLLEGE: The SGTC Lady Jets celebrate in Americus with the Division J trophy after winning a spot in the NJCAA national tournament. The team won the first round of the tournament on March 21 with a 67-53 defeat of Motlow State.

Lady Jets take down Motlow 67-53, punch ticket to round two of national tournament

LUBBOCK, Texas. – Esther Adenike scored six of her 13 points during a game-clinching 10-0 run, and 15th-seeded South Georgia Technical College (SGTC) pulled away from 18th-seed, Motlow State College, for a 67-53 victory on March 20 in the opening round of the NJCAA Division I Women’s Basketball Championship at the Rip Griffin Center in Lubbock, Texas.
Kanna Suzuki led the Lady Jets (30-4) with 15 points while Houlfat Mahouchiza added 13 points and seven rebounds for South Georgia Tech, which went on to face the number-two seed, Odessa College, in the Round of 16 on March 21. The results of this match-up were not available at press time.
The Lady Jets outscored Motlow 30-20 in the paint and outrebounded the Lady Bucks 34-31 as they strove to earn the right to advance in the tournament.
“We felt like, coming into the game, our plan was to get it inside and finish it, and in the first quarter we did a really good job,” SGTC head coach, James Frey, said. “Then the second quarter they took us out of it a little bit, and we talked at halftime that if we’re going to win, we’ve got to make open threes but also have to have an inside presence. I told them in a timeout, we’re going to get the ball inside. We’re going to get the thing to the rim and we just have to finish.”
With the teams tied at 53 in the final minutes of the game, Adenike hit a pair of lay-ups around a short jumper to push the Lady Jets to a 59-53 lead. Suzuki added a 16-footer before Desiree Corbin and Trakyra Kidd finished it off with three free throws to put the game away.
“We just stopped taking bad shots, took it to the goal and started rebounding and boxing out,” Corbin said. “We finished well under the basket and made our open shots.”
Sara Vujacic scored a game-high 19 points for Motlow State (27-5), which led 31-28 at halftime, but could not hold the lead as South Georgia Tech outscored the Lady Bucks 25-10 in the final quarter.
“I thought both teams played hard and laid it out on the line,” Motlow State head coach Bart Walker said. “The effort was given on both sides. Our point of emphasis was they have some big kids that are very talented, and we wanted to focus on limiting second shots. We did a good job of contesting first shots but gave up 14 offensive rebounds. That was kind of rough.”
SGTC came out of the gates on fire and quickly built a 10-point lead at the end of the first quarter on the strength of its defense. The Lady Jets held Motlow to just 25 percent from the field in the first quarter while shooting 46.7 percent themselves.
The Lady Bucks were able to recover and dominate the second quarter, outscoring South Georgia Tech 25-12 to take a 31-28 halftime lead. Motlow found its shooting stroke, hitting 55.6 percent (10 of 18) from the field and five of six from the three-point line.
It was a stark contrast from the first quarter, considering the Lady Jets shot the ball about the same in the second quarter (46.2 percent) as they did in the first. Motlow, however, not only shot the ball better but out-rebounded South Georgia Tech 19-15 in the opening two quarters.
Vujacic led Motlow in the first half with 13 points while Mahouchiza led South Georgia Tech with nine.