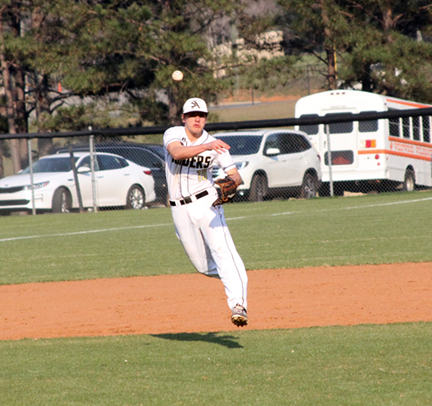 MICHAEL MURRAY I ATR: Southland’s Hunter McCain fires off a throw from left field to first base to dispatch a Westwood runner. McCain went four for four at the plate during the March 16 contest.

The Southland Academy Raiders traveled to Camilla earlier this month, on March 8, to take on the Westwood Wildcats for their third match-up of the 2017 season. The Southland crew earned an 8-2 victory over the Wildcats in the road contest.
The following week, the Raiders hit the road again to battle the Southwest Georgia Academy Warriors (SGA), dropping an 8-6 decision in the tilt.
Two days later, the Raiders gave the Wildcats a chance to even the score, hosting Westwood in Americus. The Raiders added another “W” to their tally in that match-up with a 7-2 defeat of their guests.
Southland faced the Valwood Valiants in two games on March 21 and March 23. The results of these match-ups were not available at press time.
In the opening Westwood tilt, Southland opened the scoring in the fourth inning. Stephen Barnes drew a walk. Tyler Harrell followed with a single, pushing Barnes to second base. On the following batter’s third strike, Westwood’s catcher lost control of the ball. The umpire called it a live ball, though the host team seemed to think it was an out. In the ensuing commotion, Harrell took off for first base and Barnes rounded third base and tagged home plate, just to be on the safe side. In the end, the rather unorthodox play stood, leaving the Raiders up 1-0. 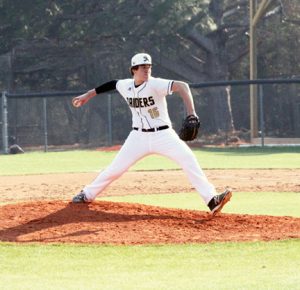 MICHAEL MURRAY I ATR:
Southland’s Harrison Bell winds up for a pitch during the Raiders’ March 16 contest against Westwood in Americus. Bell struck out 10 batters in seven innings on the mound during the match.

“It was a bit of a nutty play,” said Raider head coach, John Brady.
Michael Hudgens opened the top of the fifth frame with a single before McCain drew a walk. George Wall and Tyler Kennedy followed with a pair of singles, driving in a run. Barnes was then walked to add another and Harrell followed up with an RBI single. Clay Owens capped off the rally, reaching on a fielder’s choice to drive in another run, tossing a fifth point on the board for the Raiders.
In the top of the seventh, Owens continued the action with a single. Will Hubbard then offered up a sacrifice to push Owens to second base. Bell then blasted a homerun to clear the bases and put the game away for the Raiders.
Owens hit two for five with one run and one stolen base. Hubbard contributed one stolen base.
Bell connected on two of four at-bats, with two RBIs and a homerun. Kennedy hit three for four with two RBIs.
The following week, on March 14, the Raiders traveled to Damascus to face the SGA Warriors.
The Raiders earned a three-run advantage early in the match before the Warriors staged their comeback in the bottom of the fifth.
Kennedy singled in the top of the second and was pushed to second base when Wall was walked. Barnes then drove in Kennedy with a single of his own.
Hudgens opened the top of the fourth frame with a single. Luke Law (designated runner for Hudgens) then stole second as Kennedy stepped back up to the plate to nail a double and bring him home. Wall took one for the team when he was plunked by an errant pitch and Harrell followed with an RBI single.
SGA sparked a rally in the ensuing frame that left the Raiders in a 5-3 hole.
In the fifth stanza, Bell was hit by a pitch before Hudgens connected on a base hit. McCain then reached on an error and Kennedy singled to drive in one run. Wall then belted a double to push in another and tie the score 5-5.
SGA was unwilling to let up and followed with a trio of runs. The Raiders answered with only one when Luke Law followed a McCain base hit with an RBI double to complete the Raiders’ six-point final tally.
Hudgens batted two for four in the match. Kennedy went three for four with two RBIs and a double. Wall belted a double on his sole connection of the game, contributing one RBI.
“It was a good game,” Brady stated after the contest. “We made a couple of errors that hurt us… That was a game in which we left a couple of pitches out over the plate and made a couple of defensive mistakes. That cost us. To give credit to SGA, when we left a pitch out over the plate, they didn’t miss it. Late in the game, we missed our spot on four pitches, probably. Four key pitches. They hit all four of them. Every one of them, they hit into the gap. Four little mistakes and, next thing you know, we’re down 5-3… and then 8-6.”
“We did a lot of things well in the game also,” Brady continued. “We’re getting better at the plate… We’re cutting down on our strikeouts. We’re doing some things better… I feel like we probably could have turned that game around… We’ll get another shot at them.”
The Raiders are scheduled to square off against SGA again on April 24.
In the team’s follow-up tilt against Westwood, the Raiders had scored all of the runs that they would need by the fifth inning.
Southland opened the scoring in the bottom of the first frame when Tyler Kennedy drove in Landon Law with an RBI single.
Southland added another pair in the bottom of the fifth, when Adam Smith was brought in by Wall on a sacrifice fly. Kennedy then came in on a sacrifice off of McCain’s bat, giving the Raiders a 3-0 edge.
Westwood added a pair of runs in the top of the sixth, but the Raiders weren’t finished. In the bottom of the sixth frame, Southland added four more runs. Owens sparked the rally when he smashed a triple to complete Luke Law’s round trip. Hubbard then managed to scramble to second base on a strategic bunt and plate Owens.
Bell followed with a single and, with Hudgens at the plate, Landon Law (designated runner for Bell) stole second. Hudgens brought in Hubbard with a sacrifice and Landon Law came in on a wild pitch to seal the win for the Raiders.
Bell pitched all seven innings, giving up five hits and striking out 10 batters.
McCain led the team at the plate, hitting four for four with two doubles.
Hudgens followed closely, hitting three for four with one RBI.
Kennedy and Wall both went two for four.
Owens hit a double on his only connection of the game and crossed the plate once. Hubbard gained one hit, scored once, and contributed one RBI. Bell crossed the plate twice in the match.
“In the last three games total, we’ve only struck out 13 times,” Brady said. “We’re doing a little better at the plate. It seems like scoring consistently has been a challenge for us at times this year. We’re very young. Being consistent at the plate is something we’re going to have to improve on, but we’re continuing to throw strikes and doing a pretty good job on the mound. We’re playing solid defense… We have a lot of work to do, but we’re getting better each day.”
The Raiders return to action on March 31, hitting the road for Wilcox County. The Southland crew will return home on April 1 to face Westfield.