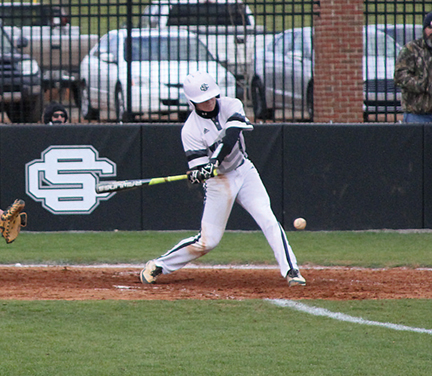 MICHAEL MURRAY I ATR: Schley County’s Cameron Vanlerberghe takes a swift swing at a fastball during a mid-March contest in Ellaville. Vanlerberghe executed a double play to halt a Brookstone rally and cinch the win over Brookstone for the Wildcats on March 17 in Ellaville.

The Schley County Wildcats improved their overall record to 12-2 with significant victories over the Brookstone Cougars and the Hawkinsville Red Devils in recent Region 4-A action on the baseball diamond. With this pair of wins, the Wildcats’ region record jumps to 9-0.
As of this writing, the ‘Cats are enjoying a four-game winning streak, following their 10-4 victory over Brookstone on March 17 and the Schley team’s 6-1 thrashing of Hawkinsville on March 21.
The Wildcats traveled to Albany on March 23 to put their skills to the test against the Deerfield-Windsor Knights. The results of this match-up were not available as of this writing.
Schley got off to a fiery start in the Brookstone tilt, when Clint Sellars put the ‘Cats on the board in the second inning with a deep solo shot to centerfield off Cougar starter, Banks Massey.
Wade Law then hit a ball deep in the hole and reached first base, later scoring on a double off Trent Bivins’ bat to give the Wildcats a 2-0 edge early in the tilt.
Brookstone cut the lead to one run in the top of the third inning. A leadoff walk bit the home team. The Wildcats almost got out of it with no runs, but a wild pitch allowed the runner to score from third with two outs on the board.
Reid Ragsdale helped get the ‘Cats back going with a leadoff single to center in the bottom half of the frame. With one out, Chase Patrick singled to left, moving Ragsdale to third. After a strike out, Brookstone almost escaped further damage, but Wade Law smacked a double down the right field line, driving in a pair of Schley runners for the 4-1 lead. Cameron Belcher followed with a single to centerfield, pushing Law to third. Law later scored on an error to give the hosts a 5-1 lead.
Schley kept the momentum up in the fifth inning in a big way when the Wildcats tossed a five-spot on the scoreboard. Jordan Hall, Patrick, and Sellars each singled to start the rally. After a pitching change, Law drew a walk with Cameron Belcher right behind him after being plunked by a pitch. Bivins then singled to drive in a run. Cameron Vanlerberghe followed, driving in another with an RBI ground out and Ragsdale came through with another RBI single to put the Cats up 10-1.
Brookstone battled back in the top of the seventh stanza, cutting the lead to six runs before Vanlerberghe started a 4-6-3 double play on a tough ground ball to end the game with the ‘Cats on top 10-4.
Patrick handled hurling duties for 6.1 innings in the test, striking out six batters and walking three. Patrick allowed only three runs.
The Wildcats outhit the Cougars 12-7 and committed no errors to Brookstone’s four.
Sellars led the Wildcats’ batters, collecting three hits in the contest. Law contributed three RBIs, followed by Bivins, with two.
Following the win, Wildcat head coach, Chuck Cheek, told the Times-Recorder, “I Loved how our guys came out swinging it. We’ve had a rough week or two. I don’t’ think I’ve ever had a team that was this decimated with injuries and sickness. We played a couple of games last week without five or six key players. Chase [Patrick] was coming off the flu. He missed a few days of school this week, but was able to come out and dominate and really give us a chance to win a big game. We still had a couple of big pieces out, but we had some guys step in and give us great at-bats to push some runs across. Bivins continues to impress and the double by Law was huge for us. Sellars hit the tank in the second inning to give us the lead. We are always trying to score first and put a little pressure on the other team. He gave us that and Chase [Patrick] took it from there.”
“Our defense is really starting to play better,” Cheek added. [Vanlerberghe] made the great play starting the double play to end it. [If you] give it to Chase [Patrick] with a chance and with his arm, it’s almost a routine out. I’m proud of how Clint [Sellars] came in and threw strikes to end it. He got the ground balls we needed to end the game.”
The Wildcats will return to action on March 27, hosting the Mt. DeSales Cavaliers.