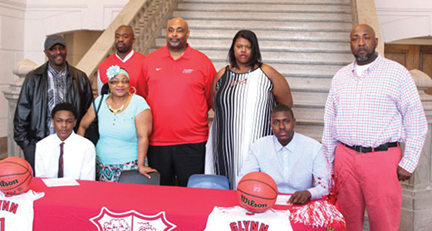 BRUNSWICK – The South Georgia Technical College (SGTC) Jets basketball team recently had a pair of promising young athletes sign on to hit the court for SGTC in the 2017-18 season.
Two high school seniors, Dominique Walker and Durand Green from Glenn Academy in Brunswick, have signed letters of intent to play basketball at SGTC.
Walker and Green have been playing ball together for years, according to a recent press release, stating that the duo got their start as eighth-graders on Brunswick’s AAU basketball team, the Warriors. Walker later moved to play for an AAU team out of Jacksonville, but he and Green remained teammates as Glynn Academy Red Terrors.
“[Glenn Academy] Coach [Dan] Moore coached these guys for three years and I was lucky to inherit them for one year,” said first-year Glenn Academy head coach, Terrance Haywood. “We’re looking forward to what they’re going to do at the next level.”
Following the signing ceremony, Green said, “It feels really good to sign the letter … It’s exciting.”
According to reports, when the two players paid a visit to Americus, both said they were struck by the small-town atmosphere. Americus drew them in for a few reasons: it is both comforting, familiar and feels safe. They’re left to focus on basketball.  “I think it’s a great start,” Green said.
Walker said the coaching staff and facilities met his expectations for a college basketball program. Both said that recruiters for SGTC were excited about the potential of their jump-shooting abilities.
Green and Walker make up two-thirds of a senior class that led the Red Terrors to their first state playoff game since 2010. The Terrors knocked off number-one seed, Stephenson High School, in the first round of the state playoffs before pushing South Cobb to two overtimes in their second-round loss.