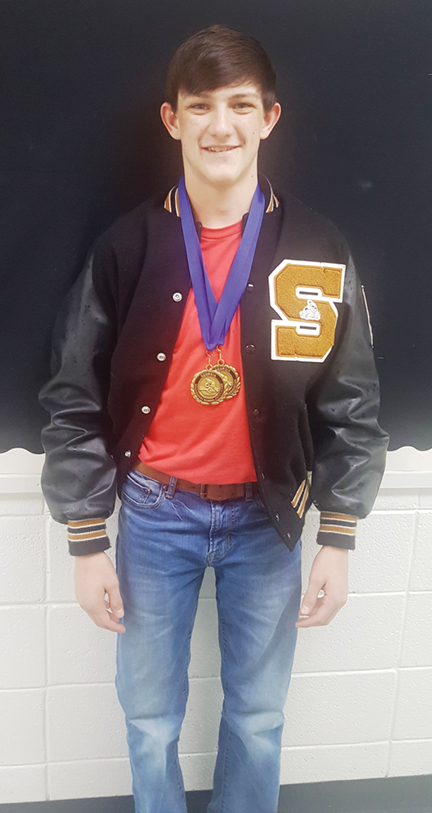 If you happen to stand in the halls of Southland Academy and listen to the students as they interact with each other between classes, you may never notice this student. Cole Landreth is quiet and draws no attention to himself whatsoever. He is the typical student – jeans, t-shirt, and, when it’s cold, a letter jacket.
If you happen to be standing around the gym during a Raider wrestling match, however, you will definitely notice him. He is still quiet and humble, but he will make you take notice when he steps on the mat. That is because wrestling has become Landreth’s passion and his hard work has already begun to pay off. Landreth is now a two-time state champion for the Raiders. As a freshman, he won the 103-pound weight class title. This season he had a nice growth spurt and competed in the 126-pound weight class. Many times, a wrestler doesn’t have the same amount of success when moving up one class, much less three weight classes. That was not the case for Landreth. He only lost one match last season. That loss came at the hands of the GHSA Region 5A State Runner-up wrestler in an exhibition match.
Most wrestlers never get the opportunity to wrestle for a state championship. Landreth has been blessed with having that experience twice. One would think he might be content with his accomplishments. If you find Landreth after school, however, he will be training for next season and another chance to be the best he can be in a sport he truly loves.