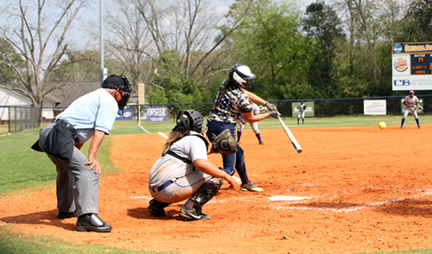 MICHAEL MURRAY I ATR: GSW’s Shannon Gibson lookss to connect on a pitch during game one of the Lady Hurricanes’ MArch 28 tilt against Albany STate. Gibson hit a grand slam to help propel the Lady Hurricanes to victory in game two of the series..

AMERICUS – The Georgia Southwestern State University (GSW) softball team recorded a combined 20 hits and earned a shutout in their double-header split with Albany State University (ASU) on March 28 at Lady ‘Canes Field in Americus.
The Lady ‘Canes dominated the initial five innings of the afternoon’s opener against Albany State but, unfortunately for the home fans, succumbed to a sixth-inning rally from the Lady Golden Rams to take a 10-7 loss.
Not to be outdone, the Lady Hurricanes came back with a vengeance in the afternoon’s closer, pulling ahead early to earn a five-inning 15-0 mercy rule shutout.
The following afternoon, GSW took a pair of tough losses to West Georgia in Americus. Following this series of games, the Lady Hurricanes enjoy a 17-23 overall record and are 4-8 in Peach Belt Conference competition.
In game one against Albany State, the Lady ‘Canes took a two-run lead after scoring one in both the first and second innings. Joshlyn Martin doubled in the first to plate Brittany Davis and Sabrina Sieber scored in the second off a throwing error.
ASU tied the game in the third off a single to right center.
With two-outs and the bases loaded in the third, Shannon Gibson knocked one out of the park to record a grand slam to give GSW a four-run lead. Albany State responded with a three-run homer at the top of the fourth to come within one run.
Allee Denney scored in the fifth off a wild pitch to give GSW a two-run edge but Albany State found their bats in the sixth and recorded five runs off three singles and a walk to come back and take a three-run lead.
Albany State was able to hold off GSW’s offense to secure the comeback.
Sieber went two-for-two at the plate and had two runs.
Gibson pitched five innings and faced 32 batters, striking out three. Gibson walked three batters while allowing 10 hits and 10 runs.
Brittany Childs pitched two innings and faced nine batters, striking out two. Childs gave up one walk and scattered two hits.
Childs didn’t allow a single run as the Lady Canes defeated ASU in Game two. GSW came out with bats swinging, recording 13 hits compared to ASU’s three.
GSW grabbed an early lead when Gibson scored on a double by Hayley Tierce and Martin scored off a fielder’s choice in the first inning.
The Lady ‘Canes scored seven more runs in the second inning on a double by Gibson, a single by Denney, a single by Sieber, and a single by B. Davis. Martin scored on an error. Denney then made her way home off a wild pitch and Childs came in off a ground out.
Childs got her second hit of the game and scored Tierce with a single to left field in the third inning. B. Davis singled down the left field line to score Martin and Mikela Barlow singled up the middle to bring in Sieber and give the Lady ‘Canes a 13-run lead. Tierce and Martin scored GSW’s last two runs in the fourth to take a 15-run advantage.
GSW’s defense was able to hold off Albany State and shut it down in five innings.
Tierce went three-for-three with four runs. B. Davis went two-for-three and Childs went two-for-three.
Childs recorded her second shutout of the season and pitched five innings, facing 18 batters. Childs struck out two batters, walked one, and only allowed three hits.
The Lady Hurricanes will return to action on April 1, hosting Flagler College in a doubleheader for Senior Day. The Lady ‘Canes will hold a retirement ceremony for head coach, Eddie Ward, on April 2 as the team hosts Armstrong for a doubleheader.