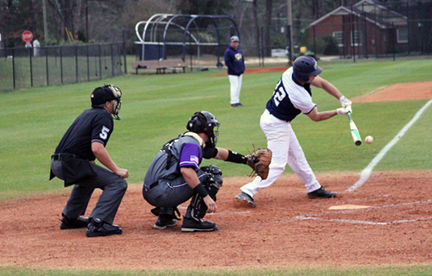 MICHAEL MURRAY I ATR: GSW’s Alex Kranick connects on a hit during a Feb. 21 contest against Middle Georgia State to spark a 20-game hitting streak that ties the all-time GSW record.

VALDOSTA – The Georgia Southwestern State University (GSW) baseball team rallied from four runs down in the fifth inning with a seven-run barrage and took a lead to the eighth, only to have Valdosta State University answer with two runs late and hand the Hurricanes a 12-11 loss on March 28 on Billy Grant Field at Tommy Thomas Park in Valdosta
The Hurricanes put runners on the corners with no outs in the ninth inning, but were unable to push across the tying run.
GSW’s record fell to 12-18 while Valdosta State improved to 21-10 as the teams split their home-and-home series this spring.
Alex Kranick wasted little time stamping his name in the GSW record book as the senior led off the game with a single to center field to extend his hitting streak to 20 games, tying the school record.
The Hurricanes put together three hits and pushed across a pair of runs in the first to take an early 2-0 lead. Valdosta State answered with two of their own in the bottom half of the inning and the score remained tied until the third.
Jared Jones brought home Evan Alderman with a sacrifice fly to but GSW back on top, 3-2, but the lead did not last long as Valdosta State answered once again in the bottom half of the inning with a pair of runs to take their first lead of game. The Blazers capitalized on a GSW error and three walks in the fourth inning to stretch the margin to four runs, 7-3.
The Hurricanes’ bats came to life in the fifth as GSW belted eight hits in the frame and pushed across seven runs. Jonathan Martin collected a pair of RBI singles in the inning as the Hurricanes made their way around the batting order. Jones, Alderman, Dakota Long, Josh Logan and Clay Patrick added one RBI apiece.
Valdosta State tied the game momentarily in the sixth inning after scoring three runs, but GSW grabbed its final lead in the top of the seventh when Martin struck again with another RBI single to plate Kranick, who had doubled two batters earlier.
Unfortunately, 11 runs were not enough for the Hurricanes to pick up the win as the Blazers loaded the bases with one out in the eighth inning and eventually pushed across the final two runs of the evening.
The first three batters in the GSW lineup were phenomenal on Wednesday, combining to go 12-for-16 (.750) at the plate while scoring seven of the Hurricanes 11 runs. Kranick, Alderman and Martin finished with four hits apiece. Martin added three RBIs. Zach Barron went three-for-six with a double.
Dalton Murray turned in a four-for-four performance to lead VSU’s batters. Max Abramson drove in six.
GSW starting pitcher, Jarrod Crum, threw three and one third innings before handing things over to the bullpen. Drew Powers picked up the final two outs in the fourth. Lawson Stewart handled the fifth and sixth innings. Coty Graham (1-1) kept Valdosta State off the board in the seventh, but ran into trouble in the eighth, loading the bases with one out. Mitch Holloway was called on to get the final two outs, but a fielder’s choice and a wild pitch put the Blazers on top for good.
Valdosta State used six pitchers in the ballgame. Beau Blair (4-1) held GSW scoreless over the final two and one third innings to pick up the win. Blair worked out of trouble in the ninth by striking out the final two batters.
GSW resumes Peach Belt Conference play on April 1 against UNC Pembroke. First pitch of the three-game series opener is scheduled for 1:00 p.m. at Hurricane Stadium.