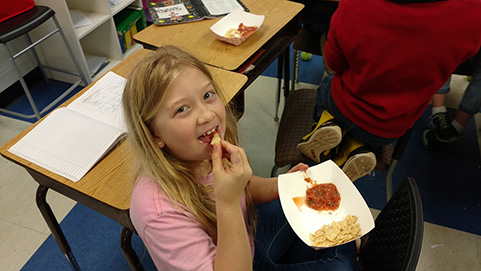 The fourth-grade scholars in Samantha Nelson’s class at Furlow Charter School have been eagerly awaiting the approach of spring, and the development of the class garden that comes with the season. The scholars have chosen to plant and harvest various herbs to make their food more flavorful. The first herb to be used was cilantro. The scholars decided that they wanted to use cilantro in a homemade salsa. They chose the recipe and the ingredients. The recipe did not yield enough for all the scholars to enjoy, so they realized it needed to be doubled. They took the ingredient list and doubled all ingredients so that there would be enough for all scholars to get more than just a sample. After doubling all the ingredients, the scholars combined all ingredients in a blender and blended them until smooth. All scholars enjoyed a snack of chips and salsa, claiming that this even possibly tasted better than the restaurant versions because it was homemade/grown. Scholars are planning our next recipe with the use of mint. Shown here is Ashley Mazer enjoying the snack.