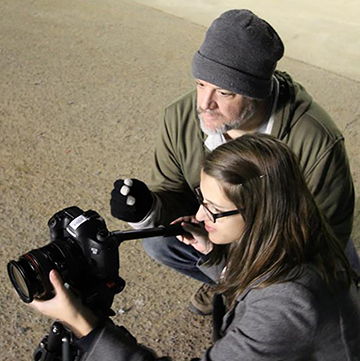 Joey Watson (right), film director and GSW assistant professor of Theater, Communication and Media Arts, and student Sydney Scott during the filming of ‘Which Way There.’

AMERICUS — With the film industry in Georgia hotter than ever, the screening of Georgia Southwestern State University’s (GSW) first feature film could not come at a better time. “Which Way There” will be screened at 7:30 p.m. Friday, April 14 at the Rylander Theatre, downtown Americus.
This is a free event and the public is invited. The GSW Department of Theater, Communication and Media Arts (TCMA) will be accepting donations at the door.
“This production is a great example of not only the work of our faculty and students but also a demonstration of collaboration between the University and the community in support of the burgeoning film industry in the state,” said GSW Interim President Charles Patterson, Ph.D.
The film – completed in 2016 – was directed by Joey Watson, Ph.D., TCMA assistant professor at Georgia Southwestern. The lead role is played by Natalie Donner, an Atlanta-based actress. Joanna Miller, a writer from Los Angeles, co-wrote the screenplay with Watson. Both Donner and Miller are former students of Watson.
“Which Way There” follows a woman named Mavis and her experiences with time travel. Each time she awakens, she finds she has either been sent forward to the year 2115, or back to the year 1915.
Many GSW students worked as cast and crew members, filling roles like assistant director and production coordinator. The screening represents the summation of a project that involved dedication from a broad spectrum of individuals on and off campus.
“I have never shot a feature with such a rapid pace,” said Watson. “We essentially shot a feature film in what amounts to a total of eight days of shooting, so it was guerrilla boot camp filmmaking where we relied on collaborations to make it work – not only from within GSW, but also from generous the Americus community.
Watson hopes to give his students the knowledge and skills necessary to work in film. This production goes a long way in training them for careers in the industry.
“Our students got exposed to and learned about the grind of a working film set,” Watson added. “The film marks a tremendous leap forward for our department and program. I am proud of how the film has turned out and all of the work that has been dedicated to it. We can build upon this a great deal as we begin prepping the next one.”
The production was aided by collaboration from the GSW School of Nursing, where the simulation lab was used to shoot hospital scenes and by several local businesses. Perry Brothers Oil Co., the Windsor Hotel, the Rylander Theatre, and the Sumter Historic Trust all allowed the film to shoot on their properties.
According to the Georgia Department of Economic Development, Georgia is a “Camera Ready” state, and the film industry had a $6 billion economic impact in FY2015.