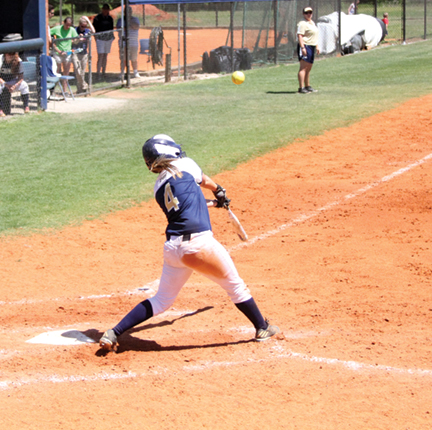 MICHA$L MURRAY I ATR: GSW’s Mikela Barlow pops one up during the third inning of game two of the Lady Hurricanes’ April 2 oduble-header against Armstrong in Americus.

AMERICUS – The Georgia Southwestern State University (GSW) Lady Hurricanes saw some tough competition on the softball diamond this past weekend, dropping a pair of tough decisions to Flagler College on April 1 before suffering another two losses to Armstrong the following afternoon.
With the weekend’s losses, the Lady Hurricanes drop to 17-27 overall and 4-12 in the Peach Belt Conference.
In game one of the Lady ‘Canes’ doubleheader against Flagler, the visitors scored off a sacrifice fly in the first and scored two more runs in the third off a double and a single to take a 3-0 lead.
The Lady ‘Canes scored two runs in the fifth to stay alive. Brittany Davis hit a single up the middle to score Ella Hawkins and Joshlyn Martin singled to third base to plate Emily Smith.
Hayley Tierce scored off a ground out in the seventh to tie the game and head into extra innings.
Flagler singled to right center scoring the winning run after holding off GSW’s batting in the bottom of the eighth frame.
B. Davis, Martin and Sabrina Sieber all went two-for-four at the plate.
Shannon Gibson pitched eight innings, facing 36 batters. Gibson struck out one batter, walked two, and allowed 10 hits and four runs.
Flagler got the ball rolling in the first inning of the day’s nightcap with a solo home run, later hitting another to score two more runs. The visitors added one more run in the first inning to take a four-point lead.
Flagler scored four more runs in the second off two doubles, an error and a ground out to take an eight-run advantage.
Martin put the Lady ‘Canes on the board in the bottom of the second off a single from Sieber.
Flagler scored one in the third off an error and another in the fifth off a wild pitch to take a 10-1 lead.
Kaley Sikes hit her first collegiate home run in the bottom of the fifth for GSW’s second run.
Flagler was able to keep GSW from plating any more batters and shut it down in five innings to complete the sweep.
Barlow went two-for-three at the plate.
Brittany Childs pitched one and one-third innings, facing 13 batters. Childs gave up eight hits and seven runs.
Sikes pitched three and two-thirds innings, facing 18 batters. Childs struck out two opponents, walked two, and allowed four hits and three runs.
The following afternoon, the Lady Hurricanes returned to their home diamond to take on Armstrong. The GSW crew’s streak of poor luck continued in this contest when the Lady ‘Canes fell behind early in game one to take a 6-2 defeat.
Armstrong jumped ahead early with three runs in the first frame and proceeded to add another in each of the second, third, and sixth innings.
The GSW team broke their silence in the bottom of the sixth when Martin tripled down the right field line, bringing in Barlow.
In the seventh inning, the Lady ‘Canes added another point when Sikes nailed a sacrifice grounder to give Gibson the chance to come home after a missed throw and narrow the Lady ‘Canes’ deficit to four runs.
Allee Denney, Emily Smith, Martin, and Gibson each contributed hits in the match with Martin bringing in the team’s only RBI.
Gibson pitched all seven innings for the Lady ‘Canes.
In the final game of the weekend, the Lady Hurricanes were shut out despite Tierce, Smith, and Ella Hawkins each connecting on two hits and Sikes striking out six batters in seven innings of work from the pitcher’s circle. The Lady Hurricanes are back in action on April 5, hosting Fort Valley State in a double-header. The first pitch for game one is scheduled to be thrown at 3:00 p.m.