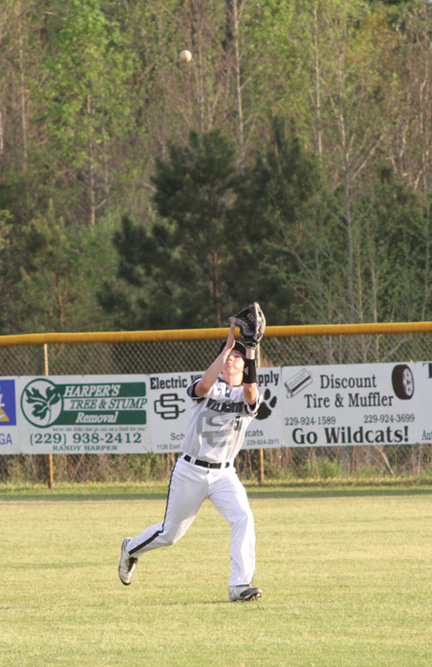 MICHAEL MURRAY I ATR: Schley’s Chance Hollomon pulls down a pop fly during a late March contest in Ellaville. Hollomon brought in Schley’s final runner to give the Wildcats a 2-1 walkoff win over GMC on April 4..

The Schley County Wildcats have extended their winning streak to 11 games with wins over Manchester, Georgia Military College (GMC), and Greenville over the past week.
On March 31, the Wildcats earned a 5-2 win over Manchester in a heated match. The ‘Cats took on GMC on April 4, earning a 2-1 win in a tough test of their skills. The Schley crew went on to deal a 17-0 blowout defeat to Greenville on April 6.
The Wildcats traveled to Perry to face the Westfield Hornets on April 7. The results of this tilt were not available at press time.
With these wins added to their tally, the Wildcats jump to an overall record of 19-2 on the 2017 season. The ‘Cats are currently undefeated in Region 4-A competition after 12 contests.
The Wildcats jumped out early in their March 31 tilt against the Manchester Blue Devils, plating one runner in each of the first, second, and fourth frames to take a 3-0 lead.
The Blue Devils broke their silence in the top of the fifth inning, but the Wildcats countered by tossing two more marks on the board in the bottom half.
With the Wildcats up 5-1 in the top of the seventh, the Manchester crew looked to make a comeback, but the Wildcats staved off their attack, allowing only one run and taking the three-point win.
Clint Sellars went the distance on the hill for the Wildcats, striking out six batters over seven innings on the mound.
Reid Ragsdale led the Wildcats from the batter’s box, collecting two hits in the match while Chase Patrick contributed one RBI.
Schley collected four hits in the match to Manchester’s five.
On April 4, the Wildcats hosted GMC, giving the Bulldogs the chance to avenge an early-season 12-0 shutout at the hands of the Schley squad.
This time around, the two teams engaged in a bitter defensive battle that didn’t see the scoreboard light up until the fourth inning, when GMC plated a runner.
The Wildcats responded with a run of their own in the bottom of the fifth to tie the score 1-1 where it would stay until the bottom of the seventh, when Chance Hollomon brought in the final run to give the Wildcats the 2-1 walkoff victory.
Sellars and Hollomon each tossed three innings for the Wildcats, with Sellars striking out two batters. Dylan Windham wrapped up the final inning on the mound for the ‘Cats, dispatching one batter.
Hollomon connected on two hits and contributed one RBI in the match to lead Schley’s hitters.
The Wildcats scattered seven total hits in the game while holding GMC to only three.
The Wildcats pulled in another substantial win over the Greenville Patriots on April 6 in Greenville, posting 10 runs in the first frame and seven in the second to earn a two-and-a-half-inning run-rule victory.
Belcher set the pace for the Wildcats at the plate, collecting two hits in the game, followed by Patrick and Lorne Barineau, who each connected on one.
Barineau and Sellars both contributed a pair of RBIs to the win while Ashton Goodin added two.
Barineau spent two innings on the hill for the Wildcats, striking out two batters before Ross Minick dispatched three batters in the third frame to put the game away.
Schley returns to action on April 11, hosting Taylor County at 6:30.