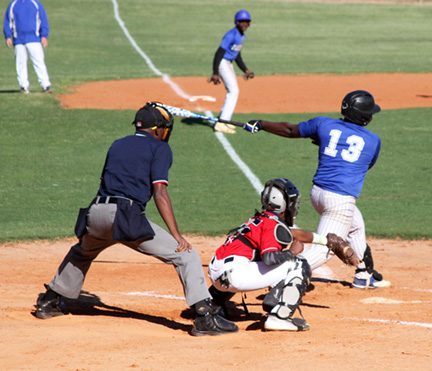 MICHAEL MURRAY I ATR: ASHS’ Brandon Alford takes a powerful swing during the Panthers’ April 7 home doubleheader against Westover. Alford contributed a double to the Panthers’ win in game two of the afternoon.

AMERICUS – It was nearly three weeks ago when the mighty Americus-Sumter High School (ASHS) Panthers marched into Albany and handed Westover High School a 13-4 beating, but the Westover Patriots headed into Americus on the evening of April 7, seeking revenge in a Region 1-AAAA double header.
In game one of the afternoon, the Panthers struggled to get their bats going as they did in their initial meeting against Westover. The Patriots hopped out to an early 13-0 lead after three innings. Americus finished the first game with only three hits.
Junior left fielder, Christian Mable, gave a spark to the Panthers late in the game, however, as he sent a fastball deep into the left center field gap. Mable turned on the jets as he rounded second base, and had no intention of slowing down until he crossed home plate for an inside-the-park homerun.
Mable’s two-RBI blast boosted the confidence of the Panthers. Americus would fall short 16-3 in game one, but the momentum from Mable’s bat carried on in game two and gave the team the boost they needed to finish off the double header.
In game two, the score remained 0-0 through the bottom of the fourth, when the Panthers got their rally going. 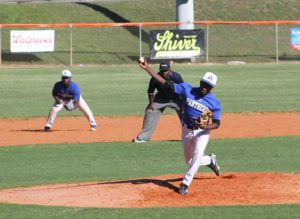 MICHAEL MURRAY I ATR:
ASHS’ Kendall Butler launches a fastball during the Panthers’ April 7 doubleheader against Westover in Americus. Butler struck out two batters in game two of the afternoon.

ASHS Freshman, Lemario Larry stepped to the plate and delivered a two-run RBI double for Americus. It was a rough game one for junior, Brandon Alford, but he made up for it at the plate in game two with a double that kept the rally going. Sophomore, Jamyron Clayton, then joined the party, adding to the Panther lead by hitting a two-RBI double as well.
ASHS led Westover 6-0 after four frames. The Patriots tried to make a comeback early in the sixth inning, adding three runs of their own to narrow the gap to 7-3, but in the bottom of the sixth the Panthers took advantage of pitching errors by the Patriots to put the game out of reach.
ASHS Sophomores, Kendall Butler and Devin Hudson, both stole bases to put themselves in scoring positions.
Mable, Devin Hudson, Braelin Williams, and T.J. Rush added RBIs as well to the Panthers’ total of 10 on the night.
Americus would roll to the victory with a final score of 10-3 over Westover, closing out the double header and winning the season series.
Williams took the hill for the Panthers in the afternoon’s nightcap, tossing five and two-thirds innings and giving up four hits and one earned run. Williams struck out eight Patriot batters. Butler closed out the game, hurling the final one and one third innings, giving up no hits, and dispatching two batters.
Americus-Sumter will look to keep the streak going as they host Turner County on April 17 at Thomas Bell stadium.