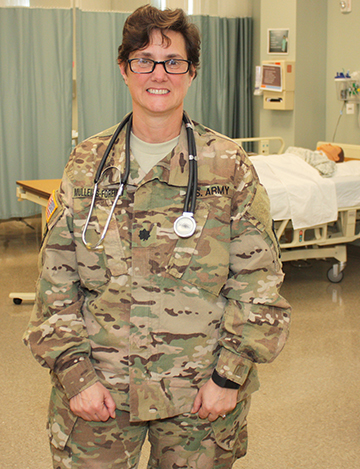 GSW Assistant Professor of Nursing Romona Mulleins-Foreman, D.N.P., will be deployed to Afghanistan in June where she will be in command of a Forward Surgical Team. 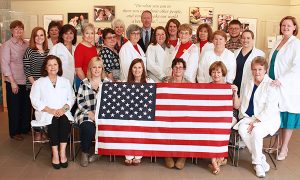 GSW Assistant Professor of Nursing Ramona Mulleins-Foreman, D.N.P., (seated, third from right) sits for a photo with colleagues from the GSW School of Nursing and GSW Interim President Charles Patterson (back row, center) during a send-off event in honor of her deployment soon..

At Salem State College in Massachusetts, Mulleins-Foreman began school with two years of military experience in hand. She had originally planned to be a veterinarian, but being that she was a trained combat medic, she chose the path closest to that and went into nursing.
Mulleins-Foreman received her bachelor of science in nursing from Salem State and continued her education at Regis University in Denver, Colorado, where she received her master of science in nursing. She went on to receive a doctor of nursing practice from the University of Tennessee School of Health Sciences in Memphis, Tennessee.
Mulleins-Foreman has been mobilized once to Germany in 1999, in support of Kosovo, and has already been deployed twice. Her first deployment was in 2004, in Iraq, where she served as the head nurse of the operating room (OR) and the infection control nurse for a combat support hospital. Her second deployment was in 2015, to Afghanistan, where she served as a nurse practitioner and interim commander of a forward surgical team. There, she traveled all over the country and circulated trauma cases in the OR and was the commander of the unit.
Her experience in the military and love of teaching have been crucial in her role as an instructor at GSW.
“The military teaches critical thinking skills and leadership that I apply in the classroom in dealing with the students,” she said. “The medical training I received helps me to bring the subject alive for my students. I have a love for teaching, which was the driving factor for me getting my D.N.P. I have the best of both worlds.”
Sandra Daniel, dean of the School of Nursing, is proud of Mulleins-Foreman and sends her best wishes for her deployment.
“Dr. Mulleins-Foreman has been at GSW for less than a year teaching in the graduate degree program in nursing,” she said. “During this short time, she has become an integral part of our nursing program and our students, faculty, and staff have benefitted from her experience and expertise in practice and nursing education. We regret that her military deployment will take her away from us for a year; however, we are grateful to her for serving our great country. We are sending her off with our good wishes, cheers, and prayers for her safe return to GSW next year.”