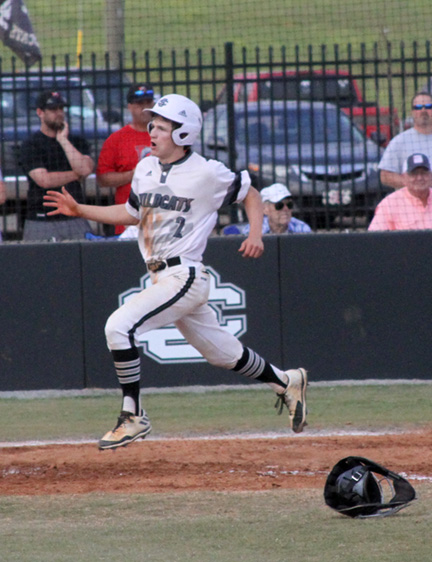 MICHAEL MURRAY I ATR: Schley’s Reid Ragsdale takes off for home plate during a late March contest in Ellaville. Ragsdale stole a pair of bases during the Wildcats’ April 7 tilt against the Westfield Hornets.

PERRY – The Schley County Wildcats hit the road for Perry on April 7 to battle the Westfield School Hornets on the baseball diamond in an up-and-down defensive road battle. After initially falling behind by one run, the Wildcats kicked off a rally in the top of the sixth frame to pull ahead and snag a 4-3 victory.
The Wildcats returned to their home field on April 11 to face the Taylor County Vikings. The results of this test were not available at press time.
With the win, the Wildcats extend their winning streak to 11 straight games and improve to 20-2 overall. As of this writing, the Wildcats enjoy an undefeated record in Region 4-A after 12 games.
Schley fell into a hole early in their road tilt, despite senior, Reid Ragsdale crossing the plate in the top of the first frame. Ragsdale opened with a walk before stealing second. He then exploited a Westfield error to advance to third base and came in on a ground out off of Clint Sellars’ bat.
The Hornets answered with a pair of runs in the bottom of the first stanza.
Chase Patrick was on the mound for the Wildcats and ran in to a little trouble early in the match. Westfield managed a couple of hits against the right-hander and built an early 3-1 lead after two innings.
Schley’s Ross Minick took the mound to pitch the third frame and gave way to Ashton Goodin in the fourth. Goodin went the rest of the way, allowing only two hits and striking out three batters.
Ragsdale managed to draw another walk in the third inning and proceeded to show his opponents his heels as he stole second base again. Ragsdale later showed off his speed again when he came home to cut the Hornets’ lead to one run at 3-2.
The Wildcats had yet to tally a hit on the scoreboard when junior, Chance Hollomon, stepped to the plate with one runner on base and one out on the board in the top of the sixth. Hollomon ripped a pitch to right field, putting runners at first and second bases.
Schley catcher, Jarrod Wall, then grounded out to Westfield’s shortstop, but the defenders’ only play was to first base, allowing both runners to advance. Ragsdale then delivered a big two-out, two-RBI single to left field, plating Garrett Peavy and Hollomon to give Schley the lead.
Goodin retired the side in order in the sixth inning and, after giving up a leadoff single in the seventh frame, struck out the side to earn the win for the Wildcats.
Following the win, Wildcat head coach, Chuck Cheek, told the Times-Recorder, “Ashton [Goodin] was really good for us tonight. He came in and gave us a chance to come back – then we took the lead and he absolutely nailed it down. Chance [Hollomon] and Reid [Ragsdale] both had huge hits for us late. Reid had a heck of a game. That’s what we need out of him.  He creates a ton of problems for the other team when he’s getting on base like that.”
“Our offense is struggling just a little right now,” Cheek continued. “We’ve lost a little of our aggressiveness. The good news is that the pitching and defense are really stepping up. We’ve worked really hard trying to improve in those areas and it’s starting to pay off. If we can get it all going at the same time, we could be a pretty decent little baseball team.”
The Wildcats will return to action on April 12, taking on the St. Anne-Pacelli Vikings in Ellaville.