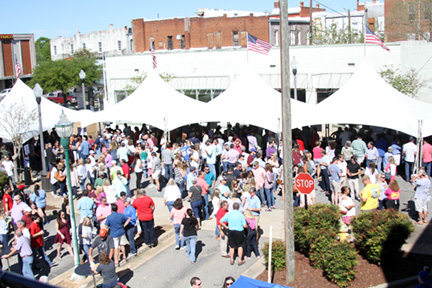 The streets of downtown Americus were teeming with craft beer enthusiasts at the first annual Hot Glass and Craft Beer Festival on April 8.

Editor’s note: Many Times-Recorder readers are likely aware the coverage of the first annual Hot Glass and Craft Beer Festival has been split into a three-part series due to the sheer abundance of exciting things that the festival showcased. The previous installment dealt with the glassblowing aspect of the event, sharing interviews with some of the event’s planners as well as several of the artists who came from all around the country to demonstrate their artistic skills. In this portion of the series, the focus is on the craft beer portion of the festival.

AMERICUS – The Inaugural Hot Glass and Craft Beer Festival, held in downtown Americus on April 8, saw 10 small-batch beer brewers, two local distilleries, and one local winery converge on this small town to give festival-goers the opportunity to try out their beverages. At the event, festival patrons were invited to treat their taste buds with a variety of different types of ales, lagers, and wheat beers, among others. With colorful monikers like Hop Diggity, Grass Monkey, and Nada Banana, the names of the featured beers were often just as lively as the drinks’ flavor profiles.
Local distiller, 13th Colony was on site, offering a sampling of their varied whiskeys, as was local vineyard, Wolf Creek Plantation, which presented thirsty patrons with samples of their three flagship muscadine wines.
Several craft breweries from all over the state were represented at the event as well, including: Omaha Brewing, of Omaha, Ga; Red Brick Brewing, of Atlanta; Service Brewing Co., of Savannah; Second Self Beer Company, of Atlanta; Sweetwater Brewing Company, of Atlanta; Southbound Brewing Company, of Savannah; The Cannon Brewpub, of Columbus; Orpheus Brewing, of Atlanta; Monday Night Brewing, of Atlanta; and Jekyll Brewing, of Alpharetta. 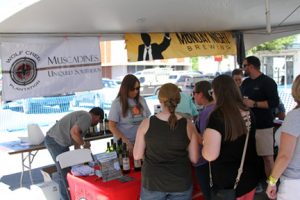 Representatives from Wolf Creek Vineyard work hard to keep up with the demand for their libations during the first annual Hot Glass and Craft Beer Festival in Americus on April 8.

From the perspective of the craft beer enthusiasts at the event, local businessman, Butch Cusack, was the man of the hour, having attracted so many well-known and some lesser-known breweries to Americus so that the locals could sample their suds.
Cusack spoke with the Times-Recorder that afternoon. 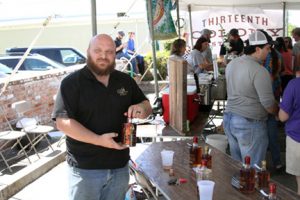 MICHAEL MURRAY I ATR An employee of the Richland Rum Distillery displays a bottle of the company’s signature spirit in the VIP tent during the inaugural Hot Glass and Craft Beer Festival in Americus on April 8.

“From the inception, we really wanted to focus on Georgia breweries and highlight what’s happening in Georgia,” Cusack said. “We wanted to really introduce the craft beer scene to a lot of Georgians that, I think, may not be familiar with it. The market, specifically in Americus, is one of those areas that, due to distribution, overall demand, and what’s been available, I think, unfortunately, has not really had exposure to what’s out there on the craft beer scene … From the get go, my goal was to really showcase some of those breweries that are regional … some of which are down the road 45 miles or in Atlanta, Savannah, or wherever … and bring some of those select breweries here to introduce people to them and showcase their products.”
Cusack said the event offered something for people who enjoy all different types of beer and even something for those who might not enjoy beer very much at all.
“I think we did very well as far as highlighting different breweries,” he said. “People create and enjoy different styles of beers. People have their passions in different areas.” 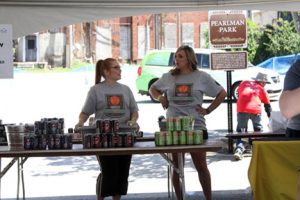 A pair of volunteers at the first annual Hot Glass and Craft Beer Festival take a break from pouring suds for thirsty patrons in downtown Americus on April 8.

“We have 10 breweries and we have Wolf Creek [Vineyards],” he added. “We wanted to showcase them as well. They’re really just getting up and out there from an exposure standpoint. It’s happening in Americus and we wanted them here as a guest, not only to get some exposure, but to offer an alternative to the beers for people whose partners and friends and family who may not be beer drinkers. Also, there’s a good relationship there between breweries and wineries. A lot of people aren’t necessarily aware of that.
“We had the same reason to do that with 13th Colony and Richland Rum, who came and supported us in the VIP area alongside Omaha and Cannon,” he continued. “We really wanted to showcase the distilleries as well because they often have a good tie-in to breweries … just bringing all of that together.”
Cusack said he was very pleased with how the event turned out.
“I think we’re ecstatic,” he said. “This is our inaugural event … We sold 950 tickets from the beer standpoint, not to mention the general admission; people who just wanted to check out the glassblowing and the music and hang out and see what’s going on … I think we had a fantastic showing for our first year. I am overwhelmed with how well it turned out. We had a fantastic group of people, between the city getting behind it through the Main Street Program and, obviously, Mobile Glassblowing Studios pulling in their resources and their people to make that piece of it happen, and everybody else who just came together to do something fun. We’re all volunteers. We really wanted this to happen and we wanted it to be the best possible event.”
Cusack tipped his hat to the various breweries that were willing to take a chance on a first-year festival despite other major craft beer festivals going on during the same weekend, including the Brews and Blues Festival in Atlanta, and the Classic City Brewfest in Athens, which was scheduled for the following day. “A lot of these breweries will be packing up and going there tomorrow. The fact that they came here to this market and this area,” he said, “hats off to them. [They came] to an area where their product may not even be distributed regularly. We have a lot of breweries here that just don’t have a lot of exposure in this area, but were willing to take a chance on our event.”
He said he is excited to be taking a small break before beginning preparations for next year’s event.
“We all took aspects of the events that we’ve been to through the years; the things that worked well … and we wanted to incorporate those things into this event and make it a memorable experience for everyone …,” he concluded. “We’re all going to take a break and then all come back and look at the lessons we’ve learned. Hopefully, it will set precedent for us to be able to establish something like this and put a little effort into it and commit more resources and just have this as a fantastic event each year.”
Dee Moore, the head brewer at Omaha Brewing, a production craft brewery housed in a former elementary school in Stewart County, spoke with the Times-Recorder as well.
“Alongside Richland Rum, we are the economic engines of Stewart County,” Moore stated. “We’re doing what I call ‘alcohol tourism’. We distribute beer across Georgia and Alabama. We’ve got hundreds of draft accounts in Atlanta. We’re the number-one craft brand in Columbus. This inaugural craft beer fest here in Americus is right in our backyard. We’ve seen a lot of fans of our brand here.”
Moore went on to say that, whenever possible, the Omaha company uses locally-sourced ingredients when crafting their brews.
Elizabeth Warnock, who was representing the 13th Colony distillery at the festival, spoke with the Times-Recorder, too.
“We are so happy to be here as Americus’ distillery … the first distillery in Georgia. To have something like this going on in our own backyard gives me a great sense of confidence in the city,” she said. “I feel like it’s amazing. I’m so happy I don’t have to get in the car and drive four hours to go to an event. We had two breweries that did a collaboration with us. We had Piedmont and Cannon Brewhouse, out of Macon, that did a saison in our barrels.”
Warnock expressed excitement at the idea of returning to the event in the future, saying, “Really, I think we could do one in the spring and one in the fall. All of the work’s been done. The City of Americus made it happen and we’re happy to be here.”
Josh Echols, representing Jekyll Brewing, told the Times-Recorder, “We’re enjoying ourselves. This is a great event. It’s really cool that Americus could pull this off and have a sold-out crowd. To me, being in the beer business, it’s hard to get a sold-out crowd, especially down here in the South. This is really great … really good stuff.”
Doug Galloway, a representative of Southbound Brewing, also expressed his excitement about the event. “It’s been great,” he said. “Butch [Cusack] has done such a great job. He’s the one that put it all together. I’ll be honest, sometimes you hear about a first-time festival and you’re a little hesitant, as a brewery, to do it because they’re sometimes disorganized and people sometimes don’t know what they’re doing. But this one has been top-notch and stellar. We ran out of two of our four beers an hour before it was done, so that shows us that people have been loving the beers. I’ve talked to a lot of people about it. There’s definitely a lot of interest in craft beer here in Americus.”