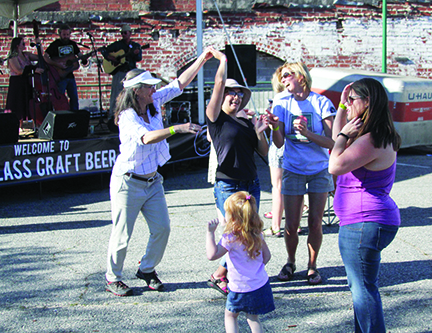 A group of music enthusiasts break it down during the ‘family jam’s’ final performance at the Americus Hot Glass and Craft Beer Festival in Americus on April 8.

EDITOR’S NOTE: In the last two editions, the Times-Recorder has written about two important aspects of the recent Americus Hot Glass and Craft Beer Festival, held in downtown on April 8. While the festival gave glassblowers from around the country and craft brewers from around the state the opportunity to showcase their wares to the local community, the festival included many other things for patrons to enjoy. Festival participants were offered the opportunity to show their enthusiasm for music and food at the festival as well. In the final part of the newspaper’s coverage of the exciting event, these aspects of the festival as well as some of the impact that the festival had on the local community are covered. 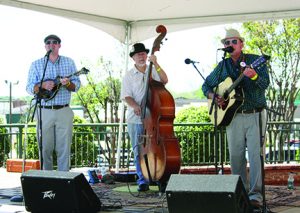 AMERICUS – The inaugural Americus Hot Glass and Craft Beer Festival in downtown offered something for nearly everyone, in addition to the event’s mission to highlight Georgia-based craft brewers and Americus’ long history of supporting the art of glassblowing.
Several vendors came from all over the city to ensure that festivalgoers could enjoy a great meal on the sunny afternoon as they danced to the sounds of the musical acts hired to perform at the event.
Three different bands performed at the festival, with the Albany-based Evergreen Family Band opening the festivities.
As a local musician and guitar player for another featured act, the Plucktones, Patrick Owen was the ideal choice to help assemble the lineup of musicians to perform at the event.
Owen recently spoke with the Times-Recorder to discuss the musical aspect of the festival.
“I feel like it went great,” he said. “The musicians that we’re working with are all grade-A talents. The Evergreen Family Band started the show off and they were fantastic. Then, the Plucktones went on and there hasn’t been a single problem so far. It’s been great. We were blessed with Pickled Holler, with Jeff Mosier assisting them. So far, it’s been great.”
Owen went on to explain that, in addition to the Evergreen Family Band, two more groups were to be featured at the festival, including local trio, the Plucktones, and the Athens-based Pickled Holler, with special guest, Jeff Mosier. 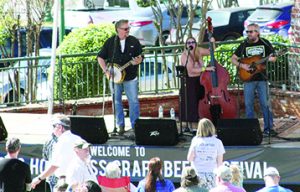 Athens-based duo, Pickled Holler, with special guest, Jeff Mosier, perform for the crowd during the inaugural Americus Hot Glass and Craft Beer Festival in Americus on April 8. Pictured above, from left, are Mosier, Jessica Williams, and Matthew Williams.