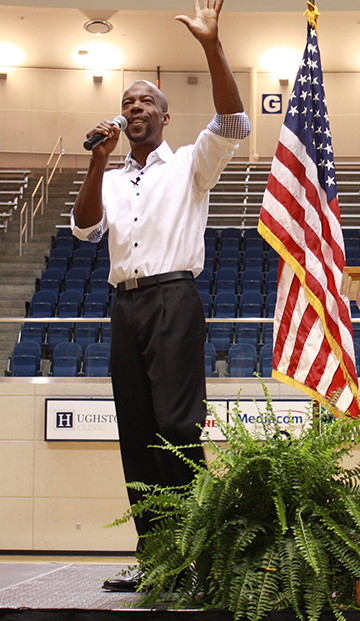 Kirk Nugent as he performs one of poem at the recent Bell Convocation at Georgia Southwestern State University.

AMERICUS — Georgia Southwestern State University recently held its 2017 Griffin B. Bell Convocation. The Bell Lecture series is a yearly lecture that was made possible through a gift from the late Griffin B. Bell, whose was a GSW alumnus and former U.S. attorney general. The purpose of the lecture series is to bring notable individuals to GSW to share their experiences.
This year’s speaker was Kirk Nugent, a famous spoken word poet and public speaker. Nugent has spent the past decade speaking at college campus, keynote events for fortune 500 companies, church ministries, and empowerment workshops. He’s spoken at venues all across America, Canada, parts of Europe, and even went to Australia to speak. He has also written a few books on the subjects that he talks about in his lectures. His talks and his books all seem to revolve around the same central idea of pursuing your dreams. This was the same message that he came to GSW to deliver.
The lecture started with an introduction to the Griffin Bell Lecture series by Charles Patterson, Ph.D., interim president for the university. He mostly just talked about the history of the lecture series, and how it came about. He then handed the microphone over to David Hunter and Linda Randall, who are part of the GSW Council on Diversity, which also helped to bring Nugent to GSW. They gave Nugent a glowing introduction where they talked about his accomplishments and how happy they were to have him come speak at the school. They also mentioned how thrilled they were that such a large crowd turned out. The lecture took place in the Storm Dome, and the crowd almost filled up one entire side of it.
Nugent took the stage and immediately opened with a moment of humor to break the tension in the room. He mentioned that he was grateful to be there, and then started in on the meat of his lecture, which primarily focused on what makes the great, great. He used a variety of quotes and stories to make his point. There’s a famous quote by Mike Tyson: “Everyone has a plan until they get hit.” Nugent used the quote to illustrate his point about how you have to keep moving through all the obstacles you’ll face in life. “You have to be able to take those hits and keep moving,” is how he summarized the idea.
After his discussion about Mike Tyson and obstacles, Nugent told the crowd about his upbringing in Jamaica and some of his struggles as a poet. He performed one of his poems, titled “Battle Scars.” The rest of the lecture focused in on how people have to pursue their dreams, and live their own life. He performed another one of his poems, which was just as good if not better than the first.
After the lecture, Nugent took time to greet members of the audience and have a quick conversation with them. This wasn’t the first time he’d been to Americus; in fact, he’s been coming here for about four years now. He said he always enjoys coming to Americus.
Later in the day, Nugent also held a leadership seminar at the Wheatley building on campus. This seminar had a much smaller turnout than the morning lecture, but that actually proved to be a benefit. The closer, more personal setting allowed the speech to have a greater impact on the crowd. Nugent said that he didn’t want to prepare a speech for this, because he wanted to speak from the heart. The topics at the seminar were roughly the same as those discussed in the morning lecture, but he was able to go into much greater detail. He was also able to field questions from the audience and that lead to even more discussion. Finally, the school purchased several of Nugent’s books and passed them out to the crowd. Everyone in the seminar received a book, and Nugent signed every copy leaving messages for the students to “Pursue their Passion.”