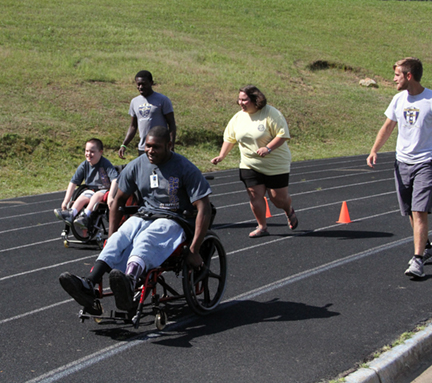 MICHAEL MURRAY I ATR: A pair of athletes from Sumter County enjoy a racing event during the Area 11 Special Olympic Games at Alton Shell Stadium in Americus on April 14.

AMERICUS – Americus hosted the Area 11 Spring Special Olympic Games on April 14 at Alton Shell Stadium.
Around 120 exceptional athletes participated in the event from Sumter, Worth, and Taylor Counties while over 100 more volunteers donated their time and effort to ensure that the event was a success.
The athletes participated in competition that demonstrated their skills in various track and field events, as well as soccer.
One of the Special Olympics’ longtime supporters and organizers, Carl Willis, spoke with the Times-Recorder at the games. “We’ve had a great crowd today,” Willis told the Times-Recorder. “We’ve had a lot of festivities… The families of out two fallen officers were present today. We had a torch run. Three of our law enforcement agents ran the torch for the first time, which was very moving. We also had our trio from the high school sing our National Anthem. We had a guest singer come in and sing while they were running the torch. In a unique situation with one of our officers, [one of the athletes] actually got to run the torch. She’s one of our students that participated today, so that was a really nice event.”
Willis has been helping to coordinate the twice-yearly event for ten years.
“In the position that I’m in, I work closely with all of these kids on a daily basis,” Willis continued. “We love hosting [the Special Olympics]. That’s the big thing for us is to be able to host here at Alton Shell Stadium.”
Gia Sandwich, administrative assistant to the Sumter County School System Special Education Director, Dr. Sebrina Pitts, told the Times-Recorder, “I am very pleased. This is the first year since I’ve been here that we’ve done an opening ceremony… I just wanted something nice so that our kids would understand what a real opening ceremony would be because they’ve never had one.”
Ashley Beaver, Accountability Specialist for the Sumter County School System, also spoke with the Times-recorder at the event. “We have volunteers from Georgia Southwestern State University and we have people from the Police Department, the Fire Department, and the Chamber of Commerce that are here…,” Beaver said. “It’s really exciting to see teachers and faculty out here supporting and encouraging everybody. Everybody’s a winner so it’s really neat to see everyone go home and feel like they’ve accomplished something.”
Gavin Bernstein, a professor of special education at Georgia Southwestern State University (GSW), was also instrumental in ensuring that the games were a success. 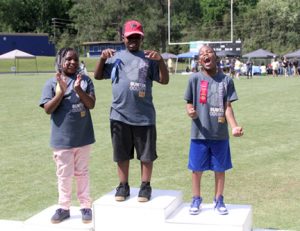 MICHAEL MURRAY I ATR:
A trio of Special Olympians celebrate on the dais after completing their event during the Area 11 games at Alton Shell Stadium on April 14 in Americus.

“We have track and field, a great Olympic town, and some great community support as well this time from the Rotary Club as well as the Fire Department,” Bernstein said. “The police did a great torch run at the beginning. That was really neat. The high school has their cheerleaders here today as well. They had a trio perform the National Anthem. They had a soloist sing while the torch run was going on…”
Asked how he felt the event had gone, Bernstein said, “It’s gone very smoothly and the weather has held out, so that’s always nice… All of the teams that signed up came and participated. We didn’t have all of the counties that we typically have, but we had a change of date so that, maybe, threw off the numbers. In the fall, we’ll have much larger games. Those will be around Halloween.”
Kelly Britsky, head coach of the GSW Lady Hurricanes basketball team, discussed the GSW athletic department’s involvement with the Area 11 Special Olympic Games as well.
“Our kids help out with the Special Olympics both in the fall and the spring,” Britsky said. “All of our teams come out and they do anything from setting up to running events to escorting the kids around to different events and cheering them on. They enjoy it and they all have a good time…. Every year, this is our thing. I’ve been here ten years and we’ve done it all ten years. I’m sure that they did this before [I came along] as well.”
Britsky estimated that around 100 GSW athletes from nearly all of the school’s athletic programs had volunteered for the event.
One of the school’s athletes, JC Auer, who is a midfielder for GSW’s Hurricanes soccer team spoke with the Times-Recorder about his experience at the event. “I’ve really enjoyed this today,” Auer said. “It means a lot to us to come out here and help these kids. It’s been a good day. We’re taking the kids from event to event and helping them out… I would love to do this again. We do this every year, so I’ll probably be back next year, too.”
Americus Fire and Emergency Services Battalion Chief, Tommy Whitaker, was on the scene as well, alongside several other members of the department.
“We have helped with this for several years,” Whitaker told the Times-Recorder. “We thoroughly love coming out here and being with the kids and having a good time just like they do. We’re basically here for medical treatment if anyone hurts themselves, but we also like to get involved and maybe do a little judging and participate and interact with them. It’s good for everybody… It’s been great. The weather’s been perfect. People from all over have come here today… It’s just great.”