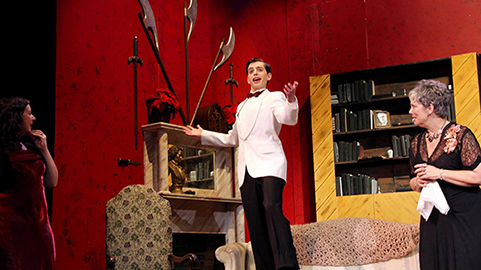 Justin Neal performs in one of his many roles while at GSW. Read how he has brought his art to life while working with an autistic child and all he learned in the process.

From Staff Reports
AMERICUS — Justin Neal, who graduates next month, has played many roles as a Georgia Southwestern State University (GSW) student, but his work with autism may be his most admirable role thus far.
“Justin has performed 25 roles in his time at GSW, including a King of England and Prince of France,” said Jeff Green, professor and chair of GSW’s Theater, Communication, and Media Arts Department. “He is about to add another royal role, the King of Navarre in ‘Love’s Labour’s Lost,’ for his capstone performance. Clearly there is something noble in Justin’s character, reflected in the noble work he has found through therapeutic applications of drama techniques in his work with autistic children.”

Neal, a native of Atlanta, began singing in middle school, which lead him to join the choir and audition for his first musical production in eighth grade. He continued to pursue his passion in high school and decided to follow that path as a Georgia Southwestern Hurricane.
“Once I visited Americus and the GSW campus, feeling that close-knit and small town vibe, I really liked it,” Neal said. “What completely convinced me was the long conversation my parents and I had on my first Preview Day with Jeff Green.
“He talked about the many opportunities there were with a theater degree, even outside of becoming an actor,” added Neal. “There are so many other fields that performance ties into, as do the things I’ve personally learned throughout my years here.”
Neal’s role at GSW has not only been as an actor and student, but as a mentor to children with autism. Through the Son-Rise Program® founded in Massachusetts, Neal has worked with a local autistic boy for the past three years.
“The Son-Rise Program® is an alternative autism treatment based upon the idea that the children show us the way in, and then we show them the way out,” its website states. “This means that, rather than trying to force our children to conform to a world that they don’t yet understand, we join them in their world first.”
Neal’s experience with Son-Rise has been nothing short of amazing.
“The child I work with has taught and shown me so much about the world that I never thought of or saw before,” he said. “He has helped me to look at the things in a different perspective and appreciate all of the little things. He’s truly one of my best friends and my time with him and the program has certainly helped shape me going forward.”
He credits his theater experience for preparing him in his role of working with autism.
“Theater has helped me open up even more and really teaches both expressiveness and cooperation,” he said. “This has helped in spades in my work with autism, which requires me to have an open mind, an open heart and certainly a lot of energy.”
Neal plans to continue to his work with autistic children after graduation. He would eventually like to work for the Son-Rise Program®.
Rekekah Martens, a graduate of GSW’s Department of Theater, Communication, and Media Arts, also worked with the Son-Rise Program® as a student.
Neal graduates from GSW on May 4, with a degree in theater and a minor in voice.