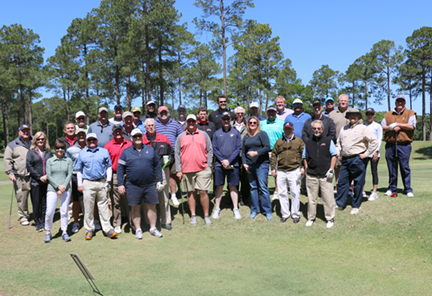 SUBMITTED BY SUMTER COUNTY PDA: Business executives from Sumter and Crisp Counties met at the Lake Blackshear Resort and Golf Club for the “Rumble on the River” on April 7.

AMERICUS – On April 7, industry representatives from both Crisp and Sumter County gathered for the inaugural “Rumble on the River” golf tournament, an executive networking event at Lake Blackshear Resort & Golf Club. Sponsored by the Cordele-Crisp County Industrial Development Council (“IDC”) and the Sumter County Payroll Development Authority, about thirty executives from both counties played in a friendly, but competitive, two-person scramble tournament.
From Sumter County, notable industries such as Imerys, Eaton-Cooper Lighting, and PharmaCentra sent representative golfers. On the Crisp County side, industries such as Marvair, Goldens Foundry, and Stella Jones participated. Some organizations representing both counties, such as South Georgia Technical College and Genesee & Wyoming, joined in the fun and were assigned sides.
With a goal of encouraging executive networking among local industries, this inaugural event went smoothly. Crisp County golfers were paired with Sumter County golfers and great interactions took place. Although the Sumter County golf scores eventually edged out those of Crisp County, everyone had a great time on a sunny, but windy, Friday.