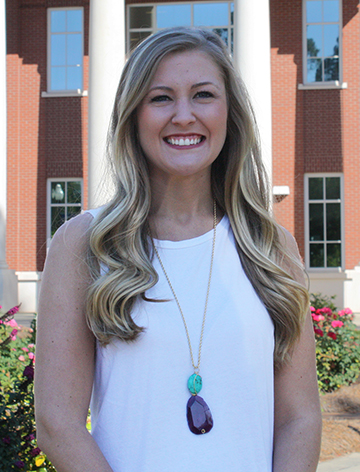 GSW nursing graduate Tori Duren stands in front of the Rosalynn Carter Health and Human Sciences Complex, the home of the GSW School of Nursing.

AMERICUS — Victoria Duren, who graduated Thursday from Georgia Southwestern State University (GSW) today with a degree in nursing, has overcome larger obstacles than most students.
Duren, a native of Adel, came to GSW as a biology major, but she found a passion for nursing along the way.
“Back in 2013, I went through two major brain surgeries and was out of school for an entire year,” Duren said. “After experiencing all of that, I came back and immediately changed my major to nursing. I realized during that time that I wanted to care for patients and make a difference in people’s lives.”
While the adjustment wasn’t easy, Duren persisted and is graduating as the School of Nursing’s Outstanding Undergraduate Student. She was recently honored with this award at the University Honors and Recognition Ceremony on April 24.
“Tori will graduate on May 4, and I am certain that receiving this degree will mean more to her than many of us can ever imagine,” said Dean of the School of Nursing Sandra Daniel. “One would never know upon meeting and interacting with this bright, young woman, that she developed a rare brain disorder after entering GSW.
“Fortunately, she recovered and returned to her studies, deciding to pursue nursing,” Daniel added. “She has persevered, despite her health threats, and has excelled in her studies. As a nursing student, she has been recognized by faculty for her clinical and academic excellence, but most of all for the compassion which she shows to her patients. She will make an excellent nurse and will make a difference in the lives of the patients who will be under her professional care.”
Through it all, Duren has always felt right at home in Americus since the first day she stepped foot on campus.
“When I toured GSW, I immediately fell in love with the campus and the community,” she said. “It’s like the campus welcomes you with open arms.
“Thinking back on my college career at GSW, I cannot picture myself getting my undergraduate degree at any other college,” she said. “The GSW School of Nursing has had a huge impact on my future as a registered nurse and has helped me in many ways, such as boosting my confidence with patient care to giving me the skills I need,” she added.
Duren plans to become an emergency room nurse.
“I love that environment and