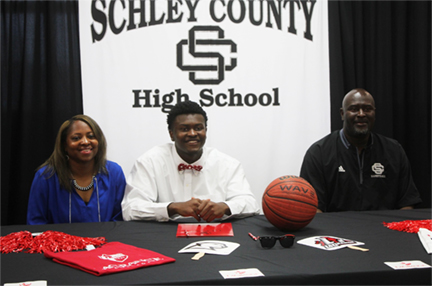 SUBMITTED BY ERNEST SCOTT: Ja’Marcus Scott (center) pauses for a photo with his parents, Stephanie and Ernest Scott, after signing a scholarship agreement with Lagrange College on May 4 at Schley County High School. Ernest Scott is the head coach of the Wildcats basketball team.

ELLAVILLE – Schley County High School (SCHS) senior, Ja’Marcus Scott, took a significant step towards the future recently, signing a four-year scholarship agreement to attend Lagrange College following graduation and join the institution’s basketball team, the Panthers, on the basketball court next fall.
Scott, a 6’4” student who has served the Wildcats basketball team for the past two years as a small forward and a shooting guard, signed the agreement in a ceremony held at SCHS on May 4.
The Times-Recorder recently touched base with Scott to discuss this exciting news.
Scott told the Times-Recorder that he has been an avid basketball player nearly all of his life; since he was five years old. He also said that, in his younger days, he enjoyed playing football and baseball as well, though he didn’t join the Wildcats on the diamond or the gridiron as a high-schooler.
Scott was named to the All-Region team in his junior and senior years for his performance on the court. “[I] lead my team in scoring and rebounding my first year and lead the team in scoring [during my] second season,” he continued. “I was second in rebounding [during my senior season]. I was voted Top Cat two years in a row at Schley County High School.”
Scott said that he decided to sign on with Lagrange College after a visit because he felt comfortable on the campus. “The coaches and I built a relationship that I was comfortable with,” he added.
He said that there are many people that he would like to thank for their support over the years. “First, I want to thank the man above for putting me in the position I’m in today, then I want to thank my parents, teachers, family and friends and the community of Schley County,” he said.
He went on to say that he would like to pursue a course of study in education while in college.