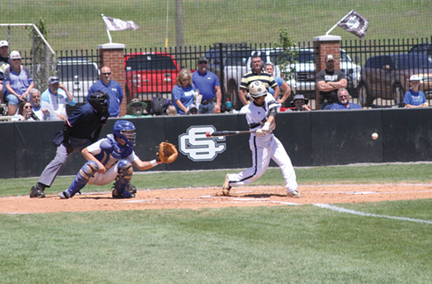 MICHAEL MURRAY I ATR: Schley’s Chase Patrick takes a powerful swing that will send the ball sailing over the left field fence and net the Wildcats two runs during the first inning of the first game of Schley County’s May 6 doubleheader against Trion.

ELLAVILLE – The Schley County Wildcats baseball team grabbed a pair of hard-earned victories over the visiting Trion Bulldogs in the second round of the Georgia High School Association (GHSA) Class A state baseball playoffs on May 6 at Wildcat Stadium in Ellaville. This meeting marked the third time in the past four years that the Bulldogs have traveled to Ellaville to take on the Wildcats in the playoffs.
As the number-one ranked Class-A team in the state according to the recently-released GHSA power rankings, the Wildcats earned a bye in the first round of the playoffs. The Trion squad earned their spot in the round two of the playoffs with a 10-0 shutout of Terrell County the previous week.
After a pair of rain delays that postponed the doubleheader, the Wildcats came out fighting in the tilts, initially taking a 5-1 victory in the day’s opener before scrapping their way back from an early deficit in extra innings to take an 11-3 win in game two and put the series away.
The Wildcats now progress to the Elite-Eight round of the tournament, in which they will host the Taylor County Vikings on May 10, beginning at 4:00 on their home field. The “if” game is scheduled for May 11 at 2:00 if necessary.
With their two defeats of the Bulldogs, the Wildcats improve their impressive overall season record to 28-2 and bring themselves one step closer to repeating their 2015 season championship-winning performance. 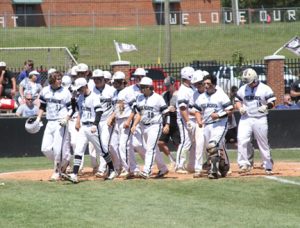 MICHAEL MURRAY I ATR:
Members of the Wildcats baseball team congratulate Will Barry (far left, # 33) after he nailed a two-RBI homerun during the bottom of the fifth inning of game one of Schley County’s May 6 playoff doubleheader against Trion in Ellaville.