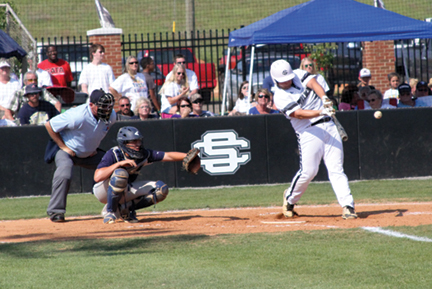 MICHAEL MURRAY I ATR: Schley’s Clint Sellars connects with the ball to open the third inning of the Wildcats’ opener against Taylor County with a homerun over the centerfield fence on May 10 in Ellaville.

ELLAVILLE – The Schley County Wildcats continued to dominate the Georgia High School Association (GHSA) Class A state baseball playoffs in the quarterfinal round, hosting the Taylor County Vikings and dealing the visitors a pair of significant defeats in the May 10 home doubleheader.
The ‘Cats opened the series with a 5-0 shutout of the Vikings before returning to the diamond to put the quarterfinal round behind them with another 8-3 win over the visitors.
Following these tilts, the Wildcats’ overall record jumps to 30-2 on the waning 2017 season.
The Schley squad will go on to face the Telfair County Trojans in a doubleheader scheduled to begin on May 17 at Wildcat Stadium in Ellaville. The “if” game will be held on May 18, if necessary.
The Trojans earned their berth in the semifinal round by defeating the Treutlen Vikings 2-1 in a series held this past week.
The winner of the Wildcats’ tilts against Telfair County will go on to face the winner of a match-up between Gordon Lee and Charlton County in the championship series, scheduled to begin on May 25.
The Wildcats came out swinging in game one of the afternoon doubleheader against the Vikings after Reid Ragsdale opened the bottom of the first frame with a single and proceeded to expediently steal second base. Ragsdale then advanced to third on an errant pitch before Clint Sellars offered up a sacrifice grounder to allow him to come home and put the home team up 1-0. 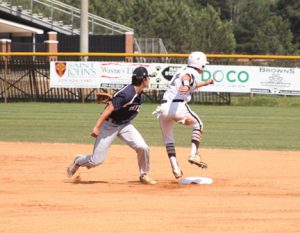 MICHAEL MURRAY I ATR:
Schley’s Reid Ragsdale effortlessly leaps up from a slide into second base to take off for third during game one of the Wildcats’ May 10 doubleheader against Taylor County in Ellaville.

Schley struck again in the bottom of the second when Cameron Belcher converted a full count into a walk and took advantage of another passed ball from Taylor hurler, Robby Hinton, to make his way to second base. Schley’s Chance Hollomon followed with a single, allowing Belcher to advance again. Jordan Hall then stepped up to the plate to launch a looping liner down the third-base line, just out of the defender’s reach, and give Belcher and Hollomon a chance to tag home plate.
The Wildcats took their 3-0 lead into the bottom of the third when Sellars added to their advantage on the home team’s first at-bat of the frame, blasting the baseball well over the centerfield fence to send the home crowd into a frenzy and further widen the gap in favor of the Wildcats.
Wade Law followed Sellars’ dinger with a double and Belcher took one for the team when he was plunked on his next at-bat. Hollomon followed with a single to lead the bases. Cameron Vanlerberghe then knocked a sacrifice grounder to bring in Law and bring the Wildcats’ final tally to five runs.
The Schley crew threatened in the bottom of the fourth when Chase Patrick opened with a single, stole second, and made his way to third on a Will Barry ground out. Patrick’s progress was halted, however, when Belcher’s long follow-up was snagged just short of the centerfield fence.
The Vikings began to make moves of their own in the top of the fifth inning, loading the bases with two outs on the board. Hall neutralized the threat, however, when he pulled down a hard fly to centerfield to send the Wildcats back to the dugout.
The Vikings tried once more to stage their comeback in the top of the seventh, with two runners managing to get on base in the late game. A strikeout by Hollomon, an out at second, and a liner snagged by Sellars at third put the game away, however.
Ragsdale, Hollomon, and Hall each collected two hits in the contest, with Ragsdale stealing two bases in the process. Hall belted a double in the match, drew one walk, and contributed a pair of RBIs.
Sellars added two RBIs to the win, including his third-inning homerun. Law contributed a double and Patrick added a single and a stolen base.
Sellars opened the game on the mound for the Wildcats, pitching four and two-thirds innings before turning hurling duties over to Hollomon, who wrapped up the game.
Sellars struck out one batter and Hollmon put away two.
After a short break, the Wildcats returned to the field for the series nightcap.
The hosts continued their offensive press in the initial inning of game two, plating one runner in the top of the first stanza. The Wildcats then added three more in the second and one more in both the third and fourth innings.
In the bottom of the fourth, Taylor County made their move, putting two runs on the board, but the Wildcats would continue to add to their lead with one run in both the sixth and seventh frames to eventually snag the 8-3 win. The Vikings put their final mark on the board in the bottom of the sixth.
Ragsdale set the pace for the Wildcats at the plate, connecting on three hits in the win, followed by Vanlerberghe and Barry, with two apiece. Barry added three RBIs to the Wildcats’ stats in game two and Patrick batted in one runner.
Ashton Goodin opened the game on the hill for the Wildcats, tossing five innings and dispatching three Viking batters. Patrick then came in as relief to close the game and send five Vikings back to the dugout. 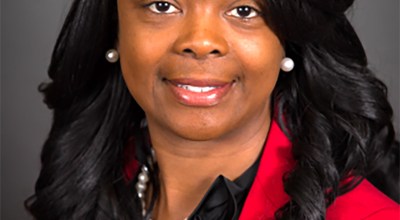