GSW takes CSU out of PBC playoffs, falls to UNG 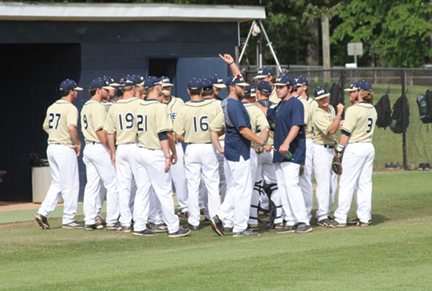 MICHAEL MURRAY I ATR: Members of the GSW Hurricanes baseball team celebrate a late-season win at Hurricane Stadium in Americus. The ‘Canes took an 11-10 victory over Columbus State in the PBC playoffs on May 11 in Florence, SC.

FLORENCE, SC – With a 7-4 victory over Albany State to close their regular-season competition, the Georgia Southwestern State University Hurricanes earned a spot in the Peach Belt Conference Playoffs, which began on May 10 in Florence, SC on the campus of Francis Marion University.
The Hurricanes took a 10-6 defeat at the hands of the University of North Georgia (UNG) Nighthawks in the opening round of the tournament on May 10, but kept the ball rolling the following afternoon with an 11-10 defeat of Columbus State University (CSU). The ‘Canes returned to the diamond the following day in an attempt to even the score against UNG, but fell 4-1, drawing the curtain on GSW’s 2017 season.
The ‘Canes finished 20-29 overall and 10-14 in the PBC.
In GSW’s first match of the playoffs, the Hurricanes led North Georgia, 5-1, in the fourth inning, but the second-ranked Nighthawks closed the door on a potential upset with three runs in the eighth to defeat GSW, 10-6.
North Georgia, the top seed in the tournament, jumped out to an early 1-0 lead with a run in the second inning. 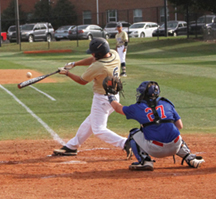 MICHAEL MURRAY/ATR
GSW’s Dakota Long, shown above during a late-season match-up in Americus, belted a homerun during the Hurricanes’ MAy 10 PBC playoff tilt against UNG.

GSW put together a four-hit fifth inning, sparked by a two-run home run from Dakota Long, and aided by a pair of North Georgia errors to take a 5-1 lead.
A pair of walks and a two-out single helped North Georgia shave the GSW lead down to two runs, 5-3, in the bottom of the fourth and the Nighthawks took the lead for good with four runs in the fifth.
GSW had a runner thrown out at home plate in the sixth inning and cut the deficit to one, 7-6, when Alex Kranick scored on a sacrifice fly by Jonathan Martin in the seventh.
UNG’s Trevor Sams halted the GSW rally with a three-run blast in eighth for the final runs of the ballgame, putting North Georgia ahead 10-6.
Kranick, Martin, Evan Alderman, Andy Moore and Josh Logan finished with two hits apiece for the Hurricanes. 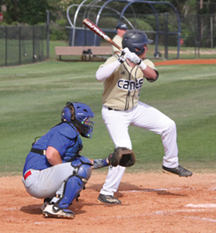 MICHAEL MURRAY I ATR:
Will Redding, shown above, brought in the game-winning RBI in the Hurricanes’ May 11 victory over Columbus State.

Sams went three-for-three with a double, a home run, and three RBIs to lead North Georgia’s batters. Bill Leroy and Andres Perez added two hits apiece.
GSW starting pitcher Kyle Spinks (2-4) threw five innings, allowed six hits and seven runs. He walked six and struck out seven. Drew Powers covered the final three frames.
Dallas Deavers (2-0) picked up the win in relief of starter Blake Gaubert for UNG. Deavers threw two and one-third scoreless innings.
GSW played the number-four seed in the tournament, Columbus State, on the following afternoon in an elimination match-up.
The Hurricanes turned up the heat against the CSU Cougars in their second contest of the week.
After surrendering six runs in the top of the ninth to fall behind 10-9, the Hurricanes scored one in the bottom of the ninth and another in the 10th to defeat Columbus State 11-10 in the elimination game.
With the win, the Hurricanes (20-28) advanced in the elimination bracket and played again on May 12. Columbus State saw their season come to a close with a 29-21 record.
Will Redding provided the game-winning hit in the 10th frame. With Zach Barron on first after reaching on an error, Redding laced a line drive to right field. The ball got past the CSU outfielder and rolled away, allowing Barron to come all the way around with the winning run and be mobbed at home plate.
GSW thought the celebration would start earlier as they took the field in the top of the ninth with a five-run lead, but relief pitcher, Mitch Holloway walked the bases loaded, then hit a batter to bring across the first run. CSU’s Jamal Howard then delivered a pinch-hit double that brought home two more. Tyler Fichter then doubled off the glove of the GSW’s first baseman to tie the game at nine.
CSU went ahead as Justin Evans brought home Fichter with a sacrifice fly. In all, the Cougars sent 10 players to the plate in the inning, scoring the six runs on two hits.
GSW answered in the bottom of the ninth as Andy Moore reached base with a one-out single. Kranick then brought home the run two batters later with an RBI single, his fifth hit of the game, tying a PBC Tournament record.
Matt Hubbard (W, 2-1) got the win for GSW after giving up no runs in the top of the 10th. Robert Hays (L, 1-1) took the loss, facing only three batters in the game. Dylan Brown got the start for the ‘Canes, going 6.1 innings on 128 pitches with four earned runs and two strikeouts. CSU starter, Brandon Koehler, lasted four innings, allowing five earned runs and striking out one batter.
Kranick finished five-for-six with a double and an RBI, becoming the seventh player in league history with five hits in a tournament game. Alderman was four-for-four with an RBI while Jared Jones went three-for-five with a double and two RBIs. Moore finished with four hits and Long had two RBIs.
Four Cougars finished the game with multiple hits, led by Fichter’s three-for-four effort. He finished the game with two doubles, two RBIs and three runs scored. Mason McClellan was three-for-five with two doubles and a pair driven in while Grant Berry was two-for-four and Bryce Delevie hit two-for-five.
When the Hurricanes returned to the field for their rematch against UNG, the Dahlonega team jumped ahead early, plating a pair of runners in the bottom of the first inning.
In the top of the following stanza, Jones cut the Nighthawks’ lead in half, exploiting a UNG fielding error to make his way home from second base.
The Nighthawks put the game away in the bottom of the eighth, adding a pair of earned runs to bring the game’s final tally to 4-1.
Logan collected a pair of hits for the Hurricanes in the tilt.
Jarrod Crum spent the full eight innings on the hill for GSW, sending three batters back to the dugout.