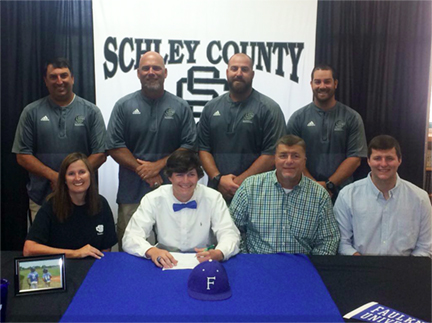 SUBMITTED BY CHUCK CHEEK: Schley’s Reid Ragsdale (seated center) smiles for the camera after inking his scholarship agreement to jon the Faulkner University Eagles on the diamond next spring. Also pictured are members of Ragsdiale’s family and members of the Wildcats coaching staff.

ELLAVILLE – In the midst of the buzz surrounding the Schley County Wildcats’ exciting 2017 season, which will see the Ellaville-based team take on Telfair County in the semifinal round of the Class-A state tournament on May 17, a pair of Schley’s team members recently took another big step towards their futures. 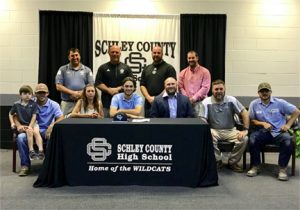 SUBMITTED BY CHUCK CHEEK:
Schley’s Chase Patrick (seated center) pauses for a photo after inking his scholarship agreement to join the CVCC Pirates on the diamond next spring. Also pictured are members of Patrick’s family and members of the Wildcats coaching staff.

Schley seniors, Reid Ragsdale and Chase Patrick recently inked scholarship agreements to continue playing baseball at the collegiate level next spring.
Wildcat center fielder and leadoff batter, Reid Ragsdale, committed to Faulkner University in Montgomery, Al. in a signing ceremony held at Schley County High School on April 28.
On May 2, the Wildcats’ Chase Patrick signed a scholarship agreement with Chattahoochee Valley Community College (CVCC) in Phenix City, Al. Patrick splits duty as a pitcher and shortstop for the Wildcats.
Ragsdale is a three-year starter for the Wildcats and carried a .408 batting average with 30 stolen bases into the playoffs. He will be joining the Faulkner University Eagles on the diamond next season.
Faulkner University won the 2013 National Association of Intercollegiate Athletics (NAIA) National Championship and has won the last two Southern States Athletic Conference (SSAC) conference titles. This year, the Eagles entered the postseason with the number-four ranking in the NAIA Top 25 coaches poll.
According to a press release penned by Wildcat head coach, Chuck Cheek, Patrick is the ace of the Wildcats’ pitching staff. He will be joining the CVCC Pirates on the diamond next season.
On the 2017 season, Patrick has amassed an impressive record on the mound for the Wildcats. He is currently 6-0 with a save and has struck out 77 batters in 51 innings pitched. Patrick sports a 1.09 ERA.
The CVCC Pirates finished third in the 2014 Junior College (JUCO) World Series and are currently ranked number seven in the nation for National Junior College Athletic Association (NJCAA) Division 1. The Pirates have also won back to back division championships in the Alabama Community College Conference’s (ACCC) southern division.
In the meantime, the Wildcats are currently gearing up to take on the Telfair County Trojans in their third consecutive Class-A State Playoff appearance.
Telfair boasts a 22-10 record. As the number-12 seed, the Trojans defeated Pelham in the first round before knocking off power houses, the Emmanuel County Institute and Treutlen to advance to their first ever Final Four appearance.
Schley enters the semi-finals as the number-one ranked team, carrying a 30-2 record. The Final Four will be held at Wildcat Park in Ellaville with first pitch scheduled for 4:00 May 17. Game two will follow approximately 45 minutes after the conclusion of game one. The “if” game will be played at 2:00 on May 18, if necessary.