Fire chief to retire after 44-plus years 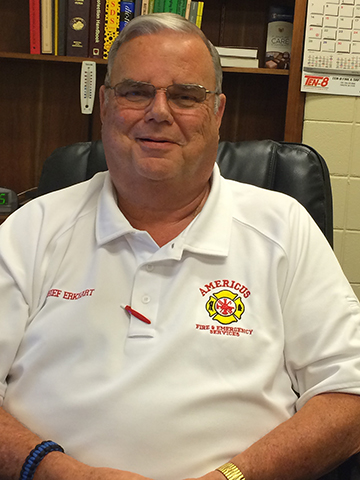 SUBMITTED PHOTO: Allen Erkhart, shown above, recently announced his upcoming retirement from his position as chief of the Americus Fire and Emergency Services Department.

AMERICUS — Americus Fire Chief Allen Erkhart has been in the fire service since he was 20 years old, and he’s remained in it because he says he enjoys helping others. He is accustomed to work, having started at the age of 13, at the Dairy Queen, first at the one on Martin Luther King Jr. Boulevard and later the one on Tripp Street. Like many successful local male leaders, he also worked as a six-day-a-week newspaper boy for the Americus Times-Recorder, throwing his papers from his bicycle.
Erkhart, 64, will officially retire on May 30, but is sure to be a friendly and frequent face around town, and he and his wife Joann do not plan on moving anywhere.
Erkhart, whose twin brother Al Jr. also retired from the fire service, stepped into this career on March 15, 1974. Erkhart said he and his brother (older by 15 minutes), between them, have about 80 years of service to the City of Americus. After graduating Americus High School Class of 1972, he attended the then-South Georgia Technical School, studying electrical construction. He had married his high school sweetheart, the former Joan Harris, shortly after they graduated high school.
He worked for the A&P and when the store here was closed, the company wanted him to move to Atlanta. “I didn’t want no part of Atlanta,” he said. A friend who worked at the Americus Fire Department (AFD) asked if he was interested in trying it out. “I said yes, and that’s how I got started in the fire service but I never thought I’d stay with it.”
Erkhart started with the AFD under Chief Robert Ranew, and underwent rookie training for two weeks in Marietta. That was the beginning and as he moved up the proverbial ladder — from firefighter to engineer to captain to battalion chief to chief in October 2005 — he saw the service change. For one, rookies now train for two months at the Georgia Public Safety Center in Forsyth. And fire personnel continue to train. And train. And train. And train some more. In fact, Erkhart said, in order to remain in the state fireman’s pension program, they must each complete 240 hours of training each year. If you’ve ever been to one of the three fire stations in Americus, you will notice two things: an orderly, clean environment, and the training that’s going on. When they are not fighting fires or visiting the local schools or cleaning and maintaining their equipment, fire personnel are in training mode.
Erkhart has worked under four chiefs: Ranew, Morris Smith, Bobby Duke (interim) and Steve Moreno. He said the biggest change in the fire service during his career is definitely in training, how much and how long. Each firefighter is also required, in addition to the 240 hours per year, to become certified as advanced emergency medical technicians (EMTs).
When asked what stands out in his mind while looking over his lengthy career, he immediately mentioned the Flood of 1994, and the tornado of 2007. He said his home was damaged by the tornado but he was on the job around the clock nonetheless.
He also recalled something that occurred about 10 years ago. He was at his home, relaxing, when one of his up the street neighbors pounded on his front door and a frantic woman was screaming that her baby son, a “preemie,” was not breathing. Erkhart went immediately to the child and resuscitated him, saving his life. “He had turned blue,” he said. “Today he’s grown up and healthy.”
The chief is also proud of what the fire department does in the local schools such as the fire clowns teaching the fire preventions programs, collecting funds for the Muscular Dystrophy Association (Give MD the Boot), cooking for hundreds at the annual Middle Flint Council on Aging Picnic, raising money for the American Cancer Society’s Relay for Life, and the department’s annual golf tournament and an annual barbecue sale to raise money to provide smoke alarms to city residents.
The City of Americus has an ISO rating of 2 (1 is the highest rating), which determines not only fire safety capabilities but also helps folks lower their insurance premiums. Erkhart said that hopefully by next year, the ISO will be 1 here. He credits all his personnel in getting that rating, however. Not one to stand on the podium alone, the chief says every success is because of his people. He commented again and again about what great people work at the fire department. He recalled losing two firefighters, both to cancer, and having four “fire funerals” for fellow firefighters. He really likes and respects his co-workers and said the main thing he will miss be the people.
Of Battalion Chief Roger Bivins, who will take the helm of Americus Fire and Emergency Services very soon, Erkhart said, “He is a fine young man, a family man, a Christian man, and he will take the fire department to another step. He’s got some good ideas.” Erkhart has known Bivins for the younger fireman’s entire 25-year career.
Erkhart and his wife will be celebrating their 45th wedding anniversary in June. They have a daughter Misty Gattis and a grandson Alex Gattis who will be graduating from Southland Academy next weekend. An active member of Grill Masters competition barbecue team for 28 years, Erkhart now wants to kick back a little, work in his yard, play golf, visit the beach. He loves all sports, he said.
As parting words, Erkhart said, “I really appreciate the city giving me the job and I appreciate the people supporting the fire department. It’s been a good ride. I couldn’t have done what I’ve done without Joan, who’s been my backbone for all 44 years.”