Wildcats to head to state championship after taking down Telfair 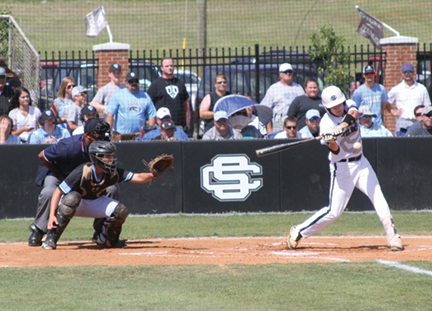 MICHAEL MURRAY I ATR: Sch;ley’s Will Barry takes a powerful swing from the batter’s box to knock a sacrifice grounder and open the scoring for the Wildcats in the first inning of Schley County’s May 17 semifinal tilt against Telfair County in Ellaville..

ELLAVILLE – The Schley County Wildcats continued their string of exciting successes on the baseball diamond on May 17 in Ellaville, earning a pair of victories over the Telfair County Trojans in the semifinal round of the Class A state playoffs.
The Wildcats opened the afternoon’s action with a 6-2 defeat of the Trojans before closing the doubleheader with an 18-1 thrashing of the guests that lasted only three innings.
With the wins, the Wildcats’ overall season record jumps to 32-2. Schley’s second victory of the afternoon extends the Wildcats’ winning streak to 24 consecutive games.
The Wildcats are currently preparing to take on the Gordon Lee Trojans, who earned the right to advance to the final round with a pair of victories over Charlton County in a three-game series. The Class A championship series is scheduled to be held in Rome, beginning on May 25 at 11:00.
The Wildcats pulled ahead early in the first game of the final-four round after Reid Ragsdale drew a walk to open the bottom of the first inning. Chase Patrick followed with a single and both runners proceeded to steal, landing them on second and third as Will Barry stepped up to the plate.
Barry laid down a sacrifice grounder, allowing Ragsdale to come home and Clint Sellars followed with a hard shot to centerfield that brought in Patrick, leaving the Wildcats up 2-0. 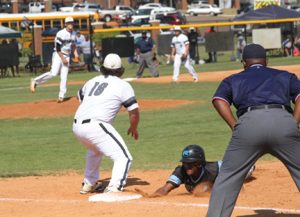 MICHAEL MURRAY I ATR:
Schley’s Wade Law snags a pickoff attempt as a Telfair County runner dives back into first base during the Wildcats’ May 17 state sefifinal match-up against the Trojans in Ellaville.

Sellars advanced to second base on a passed ball before Wade Law pushed him to third with a potential double, though Law was caught at second base. Cameron Belcher then nailed a hard double of his own that bounced off the centerfield fence, allowing Sellars to come in and give the Wildcats a 3-0 edge before they returned to the field.
The Trojans logged their first hit of the contest in the top of the fourth frame when Telfair’s Hunter Page connected on a single. The Schley crew neutralized the threat, however, when Barry scooped up Ian Blankenship’s grounder and fired the baseball off to Cameron Vanlerberghe, waiting at second to put out Page. Vanlerberghe wasted no time launching the ball to Law, waiting at first, who pulled the ball in just in time to dispatch Blankenship, resulting in a double play and sending the ‘Cats back to the dugout.
The Telfair squad finally got a rally going in the top of the fifth when a long toss to first base got away from Law, resulting in Telfair’s Trey Bess seeing the chance to score. Page was then hit by a pitch to load the bases.
The Wildcats made up for lost ground on the next batter, however, executing another double play when Patrick picked the ball up from the shortstop position and fired it off to second, where Vanlerberghe tagged the bag and made the pivot to put the runner headed to first away.
The Wildcats stopped the bleeding when Telfair’s next batter popped a hard fly that Ragsdale scrambled to get under, ending the visitor’s half of the stanza. 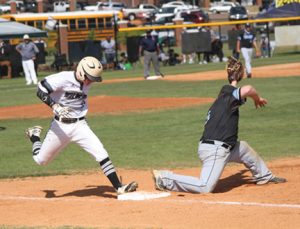 MICHAEL MURRAY I ATR:
Schley’s Jordan Hall tags first base just in time to beat the baseball in game one of the Wildcats’ May 17 semifinal-round doubleheader against the Telfair County Trojans.

Ragsdale continued the action at the plate, exploiting a Trojan error to make it to first and Patrick and Barry followed with singles to load the bases.
Law followed with a perfectly-placed shot to right field that landed just inside the baseline, sending white dust into the air at impact. As the crowd roared their approval, the ball took a hard hop and sailed over the fence, halting Law’s progress at second base. The ground-rule double did add two points to the Wildcats’ tally, however, as Ragsdale and Patrick crossed the plate on the play.
Two batters later, Schley’s Trent Bivins, pinch-running for Barry, took off for home on a wild pitch, bringing the game’s final score to 6-2.
In the top of the sixth frame, Sellars took the mound to relieve Barry, who had been handling hurling duties up to that point. The Wildcats turned another double play to keep the Trojans out of striking range and Telfair’s final runner was tagged out at first.
The Wildcats loaded the bases once more in the bottom of the sixth, but were unable to push a run across.
Telfair logged one final hit in the top of the seventh, but a pair of catches by Vanlerberghe and a runner thrown out at second by Patrick prevented them from making up any ground and brought the game to a close.
Barry tossed five innings for the Wildcats in the day’s opener, striking out four Trojan batters and walking two. Barry gave up three hits during his time on the hill before ceding the mound to Sellars.
Ragsdale, Patrick, and Barry each scattered two hits in the match to set the pace for the team. Ragsdale stole two bases and drew one walk in the tilt. He also crossed the plate twice. Patrick scored twice as well and contributed one steal. Barry added one RBI and one walk to his pair of singles.
Belcher added one RBI and a double while Law tacked on two RBIs on his double.
The Wildcats rode the momentum of this early win into game two of the afternoon, which would prove to be an exciting one for the home fans.
The Wildcats plated ten runners in the first inning of game two in a rally that began when Ragsdale drew a walk and stole second base. Patrick made it to first on a single past Telfair’s shortstop and Barry followed with a single to left field to load the bases. Ragsdale was then brought in on a Sellars sacrifice.
Bivins, pinch-running for Patrick, came in on a wild pitch while Sellars was at the plate.
Law was hit by a pitch and Belcher proceeded to load the bases once more with a single to right field.
Hall then hit a hard grounder to right field, allowing a runner to come in and stretch the Wildcats’ advantage to five runs.
Hollomon, who had drawn a walk earlier, then scored on a Telfair catcher error as Hall stole second and advanced to third.
Ragsdale grounded out, bringing in Hall and advancing Vanlerberghe to third.
Patrick followed up by slamming a double to centerfield, allowing Vanlerberghe to complete his round trip and put the Wildcats up by eight runs.
Barry drew a walk as Trent Bivins came in to run in place of Patrick.
Sellars then got in on the action again, singling to left field and allowing Bivins to score while pushing Barry to second base. Barry then came in on a Law liner, adding another run to the Wildcats’ significant lead.
The Schley crew’s progress was halted then Belcher’s fly was pulled out of the air in centerfield, sending the Wildcats into the field with a 10-run lead.
With more than enough runs to put the series away, the Wildcats added seven more in the top of the second frame before giving up one lonely run to the visitors in the bottom half.
In the third inning, the Wildcats sealed the deal with one final run and held off the Trojans’ attempts at a comeback in the bottom of the third to earn the run-rule victory and punch their ticket to the state championship.
Patrick set the pace for the Wildcats in the second tilt of the afternoon, connecting on all three of his at-bats and bringing in two RBIs. Law and Belcher each collected a pair of hits. In total, the Wildcats scattered 14 hits in the match.
Sellars added three RBIs to the Schley squad’s tally and Law contributed two.
Patrick tossed all three innings for the Wildcats, sending three batters back to the dugout.