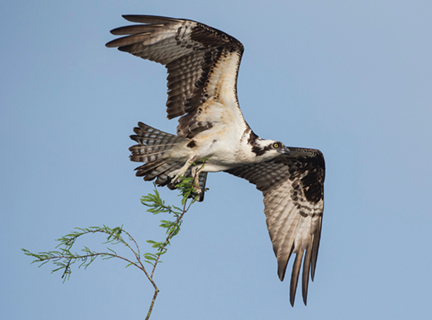 PHIL HARDY: An osprey returns to its nest with a cypress limb in tow.

Two weeks ago, my wife and I were invited to go camping with Jimmy and Judy Goodman of Vienna. We anxiously accepted the offer since we had purchased a new camper before 2016 came to an end. Our maiden voyage was three nights at Georgia Veterans State Park to test things out before I had my knee surgery. I couldn’t very well set up and take down our camper with a bum knee. Now, three months out of surgery, we were ready to go camping somewhere. Our destination was one the Goodmans knew well.
Cotton Hill Campground, just outside of Fort Gaines, is perhaps one of the best kept camping secrets in Georgia. Run by the U.S. Army Corps of Engineers, the facility is located very near the lock and dam and is well known by campers, especially those that have a fondness for fishing, which the Goodmans have. Did I mention they have a pontoon boat?
While setting up the camper, I heard several birds singing amongst the heavily wooded campground. I thought then that I would tally the number of species of birds while on this adventure. A contest was declared with my wife, Myra, to determine which one of us could spot a Bald Eagle first.
The next morning, we were on the pontoon boat with our friends. As we waited for a fish to bite, I was both actively and passively bird watching. With my binocular, I spotted Mallard and Wood Ducks. Double-crested Cormorants were plentiful as were Great Egrets and Great Blue Herons stalking ever so patiently in the shallow waters. Heard but not seen were bird calls coming from wooded areas like White-eyed Vireo, Pileated Woodpecker and Yellow-billed Cuckoo. Although not seen I checked off the birds’ presence by knowing its song or call.
The afternoon fishing expedition yielded our first Bald Eagle. My wife would have been the first to spot it had she not focused her attention on her cell phone. The eagle was an immature bird. Bald Eagles don’t get the all-white head and tail feathers until their fifth year of life.  The next two days yielded two more Bald Eagles — one being an adult bird.
The call of the Pine Warbler, American Robin and Orchard Oriole surrounded our campsite like we were at an outdoor concert. After lunch, I would sit in my folding recliner chair and be lulled into a quick nap by the sounds of nature around me making a mental note of the species.
One of the most plentiful birds we saw at Lake Eufaula were Ospreys. Ospreys are a fish-eating hawk that finds its food often by hovering, then plunging, feet-first, into the water with talons open, ready to grab the unsuspecting fish.
Here is a test question: What’s the last thing that goes through a fish’s mind before an Osprey strikes? The answer: A talon.
Whenever I see an Osprey, I’m reminded that we almost lost them. In the 1940s and ‘50s a pesticide called DDT was used to spray for mosquito control, often in neighborhoods. I can remember seeing the spray truck coming around with the pesticide fog blowing out. DDT found its way into the environment, our waterways and eventually into the fish the Osprey dines on. Results were deadly. The eggs laid by Ospreys, and other birds such as Peregrine Falcon and Bald Eagles, had too thin a shell. This resulted in broken eggs when the adult birds attempted to incubate.
Through the efforts of environmental pioneers like Rachael Carson and her book, Silent Spring, DDT was banned in the U.S. in 1972. Like the Osprey, Brown Pelicans were almost lost due to this very effective pesticide.
But today we are seeing an abundance of Ospreys, Bald Eagles, Brown Pelicans, and Peregrine Falcons. Did you know that this spring Peregrine Falcons have once again nested successfully at Tallulah Gorge in North Georgia?
The Corps of Engineers had erected nest platforms on top of channel markers in the lake. The Ospreys took full advantage of these man-made nest sites. Young birds could be seen in the nest. An adult bird flew to a nest with a 14-inch, slender fish clutched tightly in its talons. My guess was a young Alligator Gar was about to be served to three wide-open, begging mouths.
In addition to beautiful sunsets on Lake Eufaula, a great fish fry with friends, a full moon that you could read the TR by and a relaxing time camping, a total of 53 species were seen or heard. Camping and birding can go together with just a little effort.

Mitzi Parker: Clutter, and how to end it