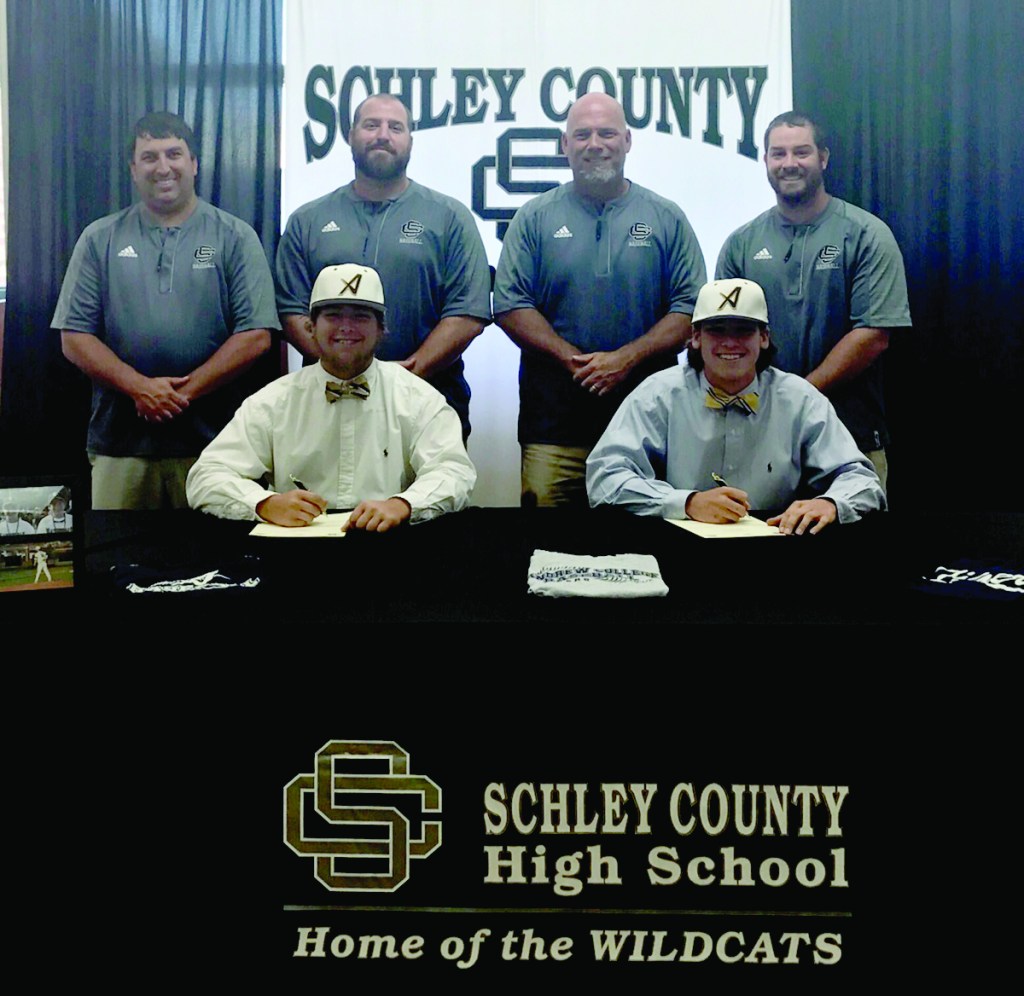 SUBMITTED BY CHUCK CHEEK: Clint Sellars, left, and Will Barry, right, pause for a photo with members of the Wildcats’ coaching staff during the signing ceremony in Ellaville on May 15. Both players will be continuing their baseball careers at Andrew College next spring.

ELLAVILLE – The Schley County Wildcats are currently gearing up to take on Gordon Lee High School in Rome for the state championship on May 24, but that’s only a part pf the exciting news that the Wildcats have shared recently.
A pair of Wildcat team members have recently signed scholarship agreements to continue to hone their skills at the next level.
In addition, the lineup for the 2017 Region 4-A All-Region Team was recently announced with the Schley squad being heavily represented on the roster.
On May 15, the Wildcats announced that team members, Clint Sellars and Will Barry have committed to join the Andrew College Fighting Tigers on the baseball diamond next spring.
Sellars is a four-year starter for Schley and also a four-time First Team All -Region player for the Wildcats. Sellars has batted .412 for the season with five homeruns and 40 RBIs, hitting in the clean-up spot for the Wildcats.
Barry has been a starter for the Wildcats for three years and is a three-time First Team All- Region Player. Barry hit .438 on the year with six homeruns and 42 RBI contributed to the team’s impressive record.
Both players were integral in the 2015 State Championship team and 2016 Final-Four team.
Following the announcement, Wildcat head coach, Chuck Cheek, told the Times-Recorder, “Coach Williams (head coach of the Andrew College Fighting Tigers) is getting two really good players. I’m super proud and very happy for both of them. They’ve worked really hard to have this opportunity. These guys have scored and driven in a lot of runs for us the past few years and we can’t wait to see the big things they accomplish at Andrew.”
Nearly every one of the Wildcats’ regular starters was recognized in the region team assignments according to Cheek, who was named Coach of the Year after helping guide the team to their second state championship appearance in three years.
Barry was also named Player of the Year while Schley ace, Chase Patrick, was honored as Pitcher of the Year.
Sellars was named First Team All-Area for his role on the team as an infielder. Reid Ragsdale took up the reins for the Wildcats, being named First Team All-Region as an outfielder. Wade Law will represent the Wildcats on the First Team All-Region as a designated hitter.
Ashton Goodin was named Second Team All-Region in the pitcher’s position and Chance Hollomon received the same honor as an outfielder. Jordan Hall was named Second Team All-Region as a utility player and Schley’s Jarrod Wall was honored with a Second Team All-Region assignment for his role behind the plate as the Wildcats’ catcher.
Schley’s Cameron Belcher and Cameron Vanlerberghe both received honorable mentions.
After the news was announced, Cheek told the Times-Recorder, “I’m proud of all of our guys. It takes every single one of them for us to be successful. Will [Barry] and Chase [Patrick] being the player of the year and the pitcher of the year is pretty special. Will [Barry] missed quite a few games with an injury – and to put those kinds of numbers up was impressive. Everyone knew Chase [Patrick] was the best pitcher in the region coming into the year. He also had some injury issues early in the year that he had to overcome. All of our guys had great years. You don’t win your region without that happening. Clint [Sellars] is a four-time First Team All-Region selection. That’s quite an impressive accomplishment.”
“We had several guys who weren’t starters last year that other teams didn’t really know about,” Cheek concluded. “They made a name for themselves this year and earned a lot of respect from the other coaches in the region.”