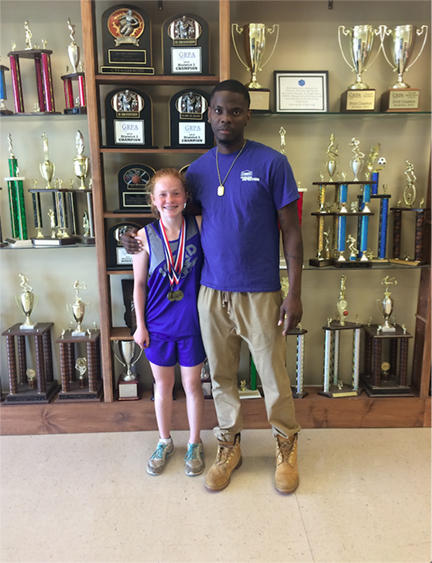 MICHAEL MURRAY I ATR: Maya Wynn, left, displays her first-place medals with coach Brandon Gooden in front of the trophy case at the Columns at Boone Park in Americus.

The Sumter County Parks and Recreation Department’s track and field team recently traveled to Augusta for the state track and field meet.
Out of 15 athletes participating in the tournament from Sumter County, one young runner managed to bring home two state championship titles.
Maya Wynn, of Plains, earned first-place awards in both the 800 and1600-meter races.
This week, Wynn spoke with the Times-Recorder to discuss her accomplishments.
“It was pretty amazing,” she said, discussing her first-place finish in the 800-meter event. “It was actually a goal of mine because last year, I got second place. After getting that close, I was like, ‘Maybe this year, I can do it.’”
Wynn told the Times-Recorder that she has been participating Track and Field with the SCPRD since the program’s inception.
“I’ve just missed one year,” she said, adding that she also enjoys wrestling, softball, and running cross country.
With her club wrestling team, Wynn recently won third-place honors in a state-wide tournament.
Wynn stated that she has been an avid runner since joining the SCPRD program. “It really started my interest in it,” she said.
Wynn is no stranger to overcoming obstacles. She has managed to make her mark on the state Parks and Recreation Department record books despite suffering from asthma.
SCPRD athletic director, Dwight Harris, told the Times-Recorder during the interview, “What she does is… She’ll kick [her competitors’] butts first and then get that [asthma] pump and wait a while. Then, she’ll kick their butts again…”
At the state track meet, Wynn won the 800-meter race with a time of 2:38.38. She took the top spot on the dais in the 1600-meter event with a time of 5:56.38.
Asked how she prepares for a race, Wynn told the Times-Recorder, ““When I get nervous before the race, I usually think of Philippians 4:13. ‘I can do all things through Christ who strengthens me.’”
On her performance at the state tournament, Harris said, “To me, it’s absolutely phenomenal. It’s good if you can just make it to the state tournament… It’s amazing if you can win at least one event, but she won two. She is the state title holder in two events. That’s remarkable. I think that, in itself, speaks volumes. I am absolutely proud of her. Not only is she talented on the track, she is a wonderful child.”
The SCPRD track and field team’s coach, Brandon Goodin, also had great things to say about the young runner.
“Last year, she ran the 800 and came in second place,” he said. “This year, [she told us] that she wanted to run the mile. [I asked her] ‘Are you sure?’ and she said ‘yes’… She ran through district and killed it and went on to kill it at state. Maya, she’s a special type of athlete. I never have to tell her, ‘Maya, hurry up and do this…’ We barely have to train Maya. She does the training herself…”
Though Wynn will not have the opportunity to defend her title next year, as she will be aging out of eligibility for the SCPRD track and field program, the up-coming ninth-grader told the Times-Reorder that she intends to compete on her high school’s cross country team, the Furlow Charter Falcons.
The SCPRD had two other athletes place at the state tournament. Kiara Thomas earned a fifth-place finish in the long jump and Ya’Nyla Davis took seventh in the 50-meter dash.

Pair of Wildcats sign with Andrew as team announces…