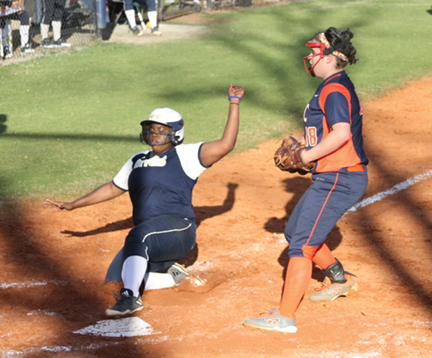 MICHAEL MURRAY I ATR: GSW’s Joshlyn Martin slides into home plate during a mid-season contest in Americus. Martin was recently named to the NFCA All-Southeast Region second team for her contributions to the Lady Hurricanes’ 2017 season.

AMERICUS – Georgia Southwestern State University (GSW) softball players, Joshlyn Martin and Hayley Tierce, were recently named to the National Fastpitch Coaches Association (NFCA) 2017 All-Southeast Region second team.
Martin, a sophomore from Fountain Inn, S.C., started all 54 games this spring for the Lady Hurricanes and led the team in several categories, including batting average (.418), hits (66) and doubles (13). In 186 total plate appearances, she was struck out only twice. Defensively, the first baseman did not commit an error all season.
Martin became the first Lady Hurricane to be named to the All-Peach Belt Conference first team in multiple years after being selected in 2017. She finished the regular season ranked third in the PBC in batting average, sixth in hits, and seventh in RBIs. 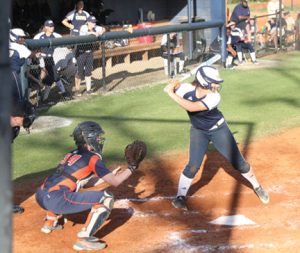 MICHAEL MURRAY I ATR:
GSW’s Haley Tierce prepares to nail a base hit during a mid-season contest in Americus. Tierce was recently named to the NFCA All-Southeast Region second team for her contributions to the Lady Hurricanes’ 2017 season.

Tierce, a sophomore from Warner Robins, started 53 games this season and led the Lady Hurricanes in home runs (12), doubles (13), slugging percentage (.679), and runs batted in (51). Tied for the all-time career home run lead at GSW, Tierce was walked multiple times in six games this spring and turned in 15 multi-hit performances. She also pitched in four games to record a 2-1 record and 3.41 ERA with nine strikeouts in 12 and one-third innings of work.
Tierce finished the regular season atop the PBC in RBIs and was fourth in home runs. She was named to the Peach Belt All-Conference second team for the second consecutive year.