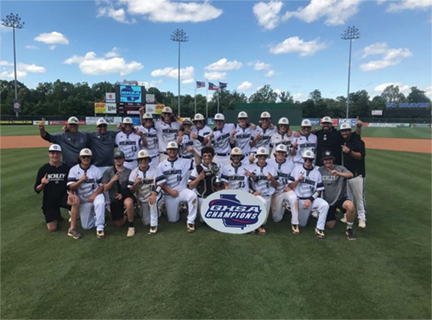 VANESSA WALL: The Schley County Wildcats pause for a team photo after defeating the Gordon Lee Trojans in Rome on May 25 to win the Georgia High School Association Class A state baseball championship.

ROME – The Schley County Wildcats have done it again, winning their second GHSA Class A state championship in three years after defeating the Gordon Lee Trojans in a May 25 doubleheader in Rome, Ga.
Following their sweep of the Trion Bulldogs and the Telfair County Trojans in rounds two and three of the state playoffs, respectively, the Wildcats earned the right to advance and face the Gordon Lee Trojans in the final round.
The ‘Cats opened the afternoon’s action with a 6-0 shutout of their opponents before claiming the state crown in game two with a 12-3 win over the Trojans.
There seemed to be little doubt in any of the hundreds of Schley fans’ minds that their home team would be able to pull off the win as they converged on State Mutual Stadium, home of the Rome Braves, to cheer the Wildcats to victory.
Alongside the state title, the Wildcats claimed a 34-2 overall record on the 2017 season after remaining undefeated in Georgia High School Association (GHSA) Region 4-A competition following 16 regular-season contests.
This season has certainly been a productive one for the Wildcats’ team, which saw four players, Chase Patrick, Clint Sellars, Will Barry, and Reid Ragsdale sign scholarship agreements with schools all over the state of Georgia. In addition, nearly every member of the Wildcats’ starting lineup was recognized with positions on the All-Area teams for their performances on the diamond this year. 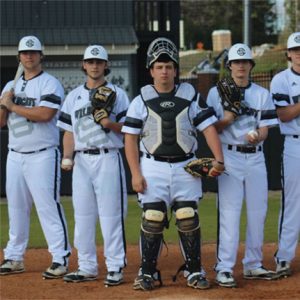 VANESSA WALL:
The Schley County Wildcats’ state championship victory on May 25 was a tad bittersweet, as the team will now say goodbye to five senior players. Shown above are senior team members, Clint Sellars, Chase Patrick, Jarrod Wall, Reid Ragsdale, and Will Barry.