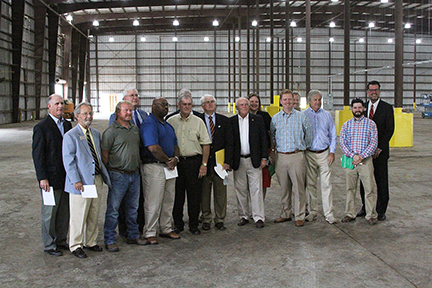 AMERICUS — The Americus-Sumter County Payroll Development Authority (PDA) held a local job announcement ceremony Thursday in Americus.
At the ceremony, Reagan Barksdale, president of Resolute Manufacturing, a company purchased two years ago by Sumter County-based company, Tape Specialists of Georgia (TSG), announced that Resolute Manufacturing will soon be opening a plant in the Frank Myers Industrial Park in Americus (the site of the former Textron plant).
In a brief interview, Barksdale, an Americus native, told the Times-Recorder that the plant is expected to be fully operational by the first week of August.
The plant is expected to employ around 50 people and will be used to create die-cut insulation parts for ovens and water heaters. With the addition of these jobs to the company’s payroll, Barksdale said that, between TSG and the new plant, the companies, together, will employ over 200 people.
Addressing the crowd from the podium, Barksdale also stated that he hopes to begin installing equipment in the facility in three weeks and plans to begin interviewing potential employees shortly thereafter.
Paul Hall, PDA chairman, opened the ceremony by addressing members of nearly a dozen community economic development organizations, local business leaders, and elected officials.
Hall thanked them all for their service to the community before turning the podium over to Barksdale, who shared details of the upcoming plant opening.
John Watford, Ed.D., president of South Georgia Technical College, spoke at the ceremony as well, saying, “This is a great day for Americus and Sumter County … We’re really thrilled about this opportunity, not just for the Barksdale family, but for the whole county.” He went on to discuss some of the positive effects that locally-owned industries have had on the community throughout Americus’ history.
John Roberts, chairman of the Chamber of Commerce board of directors, spoke as well, congratulating Barksdale on the achievement and saying, “of the Chamber of Commerce, I want to thank you for investing in this community. We look to support you in anything you need … ”
Americus mayor, Barry Blount, addressed the crowd, highlighting some of the successful entities that previously occupied the building in which the plant will be situated.
“It’s great to see manufacturing return to this facility,” he said.
Sumter County Board of Commissioners (BOC) chairman, Randy Howard, spoke at the event as well, thanking Barksdale for continuing to invest in the community and pledging the BOC’s support of the venture.
State representative, Bill McGowan, D-Americus, concluded the ceremony, saying, “This is a great day for Americus and Sumter County and a great day for our part of Georgia. We have some great things happening down here ¬¬… I am very proud to be a part of this team.”