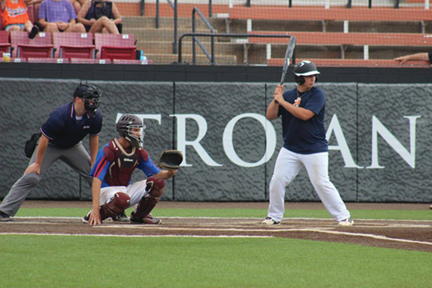 VANESSA WALL: Ccatcher, Jarrod Wall, awaits a pitch during the Americus Travelers’ final game of the Troy tournament in which the Travelers defeated the Game On Expos 1-0 on June 4.

TROY, Ala. – The Americus Travelers Baseball Club 17U team kicked off their 2017 season with a bang on June 3 at Troy University in Troy, Ala.
After a rain delay held off the start of the tourney by one day, the Americus-based team opened their summer campaign with an 8-0 rout of Tri County’s crew. The Travelers then geared up to face a group of foes from Dothan, Ala, making a late comeback to defeat their opponents 7-5.
The Travelers saw some difficulty in their next match-up, later that evening, as the team suffered a 9-1 defeat at the hands of Troy Post 70, but made up for lost ground the following day with a 1-0 victory over the Game On Expos to wrap up the tournament with a 3-1 record.
In the team’s opening contest of the tournament, the Travelers scored more than enough runs in the initial frame to put the game away. Taking an 8-0 lead in the bottom of the first, the Travelers held off Tri County’s offensive endeavors to earn the win after four and a half innings.
The Travelers scored on hits by Reid Ragsdale, Matt Cooper, and Cameron Vanlerberghe as well as walks drawn by Will Lang and Cameron Belcher and a Tri County error. 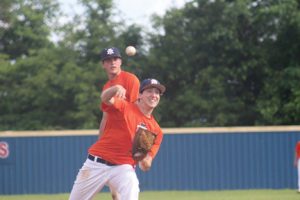 VANESSA WALL:
The Travelers’ Chance Hollomon fires off a ball in an attempt to put away a Dothan runner during game two of the Travelers’ weekend series in Troy, Ala.

Will Kelley logged two hits in the tilt to lead the Travelers from the plate. In total, the Travelers scattered seven hits while holding Tri County to only one.
Gavin Paul worked on the hill for three innings for the Travelers. Paul allowed one hit and one walk while fanning four prospective Tri County batters. Tyler Ross wrapped up the final two frames, sending one hitter back to the dugout.
That same afternoon, the Travelers returned to the diamond to face the Dothan 17U team.
The Travelers pulled ahead early, plating three runners in the top of the first frame, two of which came in off of a Kelley RBI. The Americus crew added one more run in the top of the third inning when Ragsdale blasted a solo homerun.
The Dothan team made their move in the bottom of the second, bringing in one runner, and went on to toss four more marks onto the scoreboard in the bottom of the third inning.
With the Travelers down 5-4, the squad pulled ahead for good when Will Lanneau offered up an RBI sacrifice fly and Vanlerberghe belted a double to add three more runs to their tally; enough to clinch the win.
Cooper opened the game for the Travelers on the mound, dispatching one batter in two-thirds of an inning. Chance Hollomon then took the hill to hurl the following 2.1 innings. He allowed no runs, one hit and walked one batter. Ross earned the save, recording the final three outs.
Belcher and Ragsdale each connected on a pair of hits in the match. Vanlerberghe and Kelley both added two RBIs to the win.
Both teams collected nine hits in the test.
The following morning, the Travelers donned their navy blue and orange jerseys once more to take on tournament hosts, Troy Post 70.
The Troy division kicked off an eight-run rally in the bottom of the second stanza to grab a significant early advantage. Americus answered with one run in the top of the third, but a determined Troy defense put a halt to their progress, stubbornly refusing to let the Travelers gain any additional ground.
Troy added their final run in the bottom of the fourth to claim the victory.
Lanneau and Kelley split duties on the mound for the Travelers, with both hurlers putting away two batters.
Ragsdale, Belcher, and Paul each collected one hit for the Travelers.
Bent but not broken, the Travelers dusted themselves off following the defeat and hit the diamond one final time to battle the Game On Expos.
The Travelers scored the only run of the game in the bottom of the second stanza on an RBI single off of Hollomon’s bat before tightening up their defenses to stave off the Game On Expos’ comeback attempts over the ensuing five innings and claim their third win of the tourney.
Cooper, Hollomon, Lang, Belcher, Paul, and Jarrett Kemp each recorded hits in the contest. The Travelers outhit the Game On Expos 6-1.
Tyler and Ross combined efforts on the hill in the shutout, with Paul tossing the first five innings before ceding the mound to Ross, who recorded the final six outs.
The Travelers traveled to Carrollton on June 9 to take part in the Game On Showcase Event at West Georgia State College. The results of these match-ups were not available at press time.
The Travelers will return to action next weekend, traveling to Dothan to compete in the Matthew Jernigan Invitational.