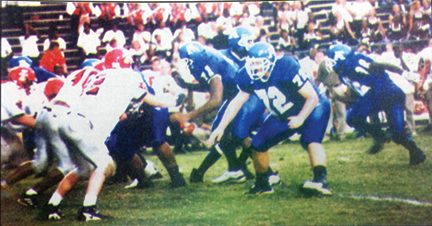 ATR FILE PHOTO TAKEN BY NICK STALLINGS: This photo was published in the sports section of the Americus Times-Recorder on Sept. 10, 2000. The picture’s oroginal cutline reads: I GOT YOUR BACK: Joey Tucker (72) and Marcus Campbell (71) look to secure one side of the line of scrimmage as Americus High School quarterback, Robert Johnson, prepares to hand off the football to Chad Holt (32) Americus took care of visiting Irwin County High School at Finklea-Robinson Field.

Editor’s note:
For over 100 years, the Americus Times-Recorder (ATR) has been helping to keep local readers abreast of what’s happening in the sporting world in Sumter County and the surrounding areas.
Modern readers will likely recall the Times-Recorder’s past celebrations of some of the most exciting periods of athletic excellence in the area in a series off columns titled, “From the Archives”. Recently, the ATR began taking another trip down memory lane, continuing the tradition of this series though, this time around, the trip back in time has been much shorter than it has in the past.
In last week’s installment of the “From the Archives” series, we began digging through our vast collection of past ATR editions to highlight the 2000 Americus High School Panthers, who mercilessly plowed their way through competitor after competitor on their way to an undefeated season and a state championship victory.
In the first installment of this year’s series, the ATR discussed the Panthers’ 2000 curtain-raiser, in which the Americus crew hosted the Lee County Trojans and handed the visitors a 26-7 defeat to set the tone for what would soon be apparent to local fans as a spectacular season.
Following this initial win over the Trojans, the Panthers began preparations to take on the Irwin County Indians in their second tilt of the fall.
———————–

———————–
Mid-September of the year 2000 was a busy time in Americus, as hundreds of charitably-minded volunteers began to descend on the small town to participate in a “Blitz Build”, a collaboration between Habitat for Humanity and the Jimmy Carter Work Project, which sought to build 35 houses in Sumter County for underprivileged families.
At the same time, in Americus, local actors and musicians were diligently practicing to bring to life the Sumter Players’ production of The Cotton Patch Gospel, based on a novel by Clarence Jordan, one of the founders of Koinonia Farms.
The town’s political landscape was seemingly tumultuous at the time, as local candidates for the position of Sumter County sheriff, Randy Howard, Nelson Brown, and Bob Ingle were engaged in a struggle to earn the right to represent the people of Sumter county.
On the national stage, economists in the United States were just taking in the announcement of a merger between two of the most prestigious financial institutions in the country; JP Morgan and Company and the Chase Manhattan Bank; a merger that reportedly combined $35.2 billion worth of assets. At the same time, the Times-Recorder was busily reporting then-president, Bill Clinton’s efforts to convince the Organization of the Petroleum Exporting Countries (OPEC) to increase oil production and drive down gas prices.
In the national sports world, the Times-Recorder was abuzz with news about Americus native (and AHS alum), Dan Reeves’ return to Mile High Stadium in Denver; this time around as head coach of the Atlanta Falcons. Reeves had previously served as head coach of the Denver Broncos from 1981-1992 and the Falcons had suffered a Super Bowl loss to the Broncos in 1999.
Local sports fans were in the throes of football fever, with the young season beginning to gain steam and several area teams showing tons of promise.
Fresh off of a defeat of the Crisp County Cougars, the Sumter County Comprehensive High School Rams were gearing up to take on Kendrick High School, of Columbus in a tilt that they would go on to win 12-6. The Southland Academy Raiders were looking to make up lost ground in a test of their skills against the Brookwood Warriors after dropping their record to 1-1 the previous week with a defeat at the hands of Windsor Academy.
Meanwhile, the Tri County High School Eagles were featured in a Times-Recorder article, detailing quarterback, George Jackson’s seven for seven passing performance that led the team to a 33-0 shutout of the Abbeville High School Yellowjackets, of Alabama.
———————–
On Sept. 7, 2000, AHS fans were still reeling from the thrill of the Panthers’ season-opening victory over the Lee CountyTrojans when ATR sports editor, Matthew Brown, published a preview of the week’s upcoming action, a tilt against the Irwin County Indians titled, “Americus-Irwin County a top-10 clash in AA”.
“The game was the last one placed on the Americus High football schedule, and it may turn out to be a barometer of which will be a team to watch out for late in Class AA,” the article read. “…Americus maintained its No. 5 state ranking in Class AA with the 1-0 record while Irwin stands at No. 10. The Indians are one of numerous programs which have moved up to the AA classification from Class A, and Irwin went 9-1 last year, losing to eventual champion Charlton County in the state second round…”
In the piece, Brown quoted then-Panther head coach, Erik Soliday as saying, “They’re going to be a good football team. They have a tremendous running back … one of the best backs in the state. They have a big 6-foot-5 receiver they like to throw the ball to. They’ve been real competitive the last few years, so they know what it’s about.” The article went on to say that, because the match-up would be the Indians’ season opener under a newly-hired head coach, there was no way of knowing what to expect from the visiting Ocilla team.
Soliday continued the interview, remarking that, in order to come out on top, the Panthers would have to be “mistake-free”, referencing the team’s loss of 70 yards on 10 flags the previous week.
The following evening, Soliday and the Panthers’ fans would have their questions answered when the AHS squad hit the field to deal a 33-7 blow to the visiting Indians.
ATR sports correspondent, Wayne Sprouse, wrote an in-depth overview of the game’s action in a Sept. 10, 2000 article titled, “Panthers claw up Irwin Indians”. 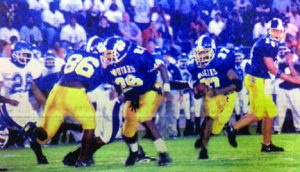 ATR FILE PHOTO TAKEN BY ROSS PEEPLES:
This photo was published in the sports section of the Americus Times-Recorder on Sept. 17, 2000. The picture’s oroginal cutline reads: Crisp County High’s Prentice Russell (37) follows blocking by teammates Kevin McCray (86) and Bernard Williams as he looks for running room in the Cougars’ Friday night home game against Americus. Pursuing the play as Cougar quarterback Wesley Hill (14) watches in the Panthers’ Joe Bruce. Americus won the game 34-21.