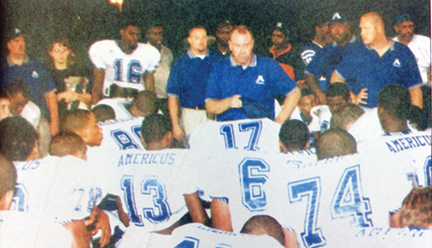 ATR FiILE PHOTO TAKEN BY NICK STALLINGS: Published in the ATR on Sept. 28, 2000, this photo was titled “LISTEN TO WHAT I SAY”. The original cutline reads: Americus High School football coach Erik Soliday wasted no time in reminding his Panthers of last year’s upset at the hands of Randolph-Clay during Homecoming. Americus faces the Red Devils again this Friday.

Editor’s note:
Throughout Americus and Sumter County’s history of athletic excellence, the Times-Recorder (ATR) has been there to report on the exciting happenings around the area. Throughout the years, the ATR has built up an extensive archive of articles detailing the some of the area’s most productive periods in sports.
Recently, we have begun a journey 17 years into the past to celebrate the Americus High School football team’s 2000 season which saw the Panthers win a state championship title. In our last installment of this “From the Archives” series, we discussed the Panthers’ 26-7 win over Irwin County before moving on to the team’s 34-21 defeat of the Crisp County Cougars in the annual “Battle of the Flint”.
With a trio of “W’s” in the record books, the Panthers set their sights on Region 1-AA competition. The Panthers’ next victims would be the Terrell County Greenwaves.
————————

————————
In late September of 2000, the City of Plains was gearing up for their annual peanut festival, aptly named, “Plains, Peanuts, and a President”. At the same time, residents of Americus were busily preparing for the 13th annual “Taste of Sumter” and the Times-Recorder was busily reporting on newly-constructed Sumter Youth Development Campus that would soon be opening its doors.
On a more dramatic note, officials from the FBI had just announced that a man wanted for murder in Michigan had just been apprehended in Americus in the Perlis Plaza parking lot.
Also, on the national sports stage, the Sydney Olympics were in full swing and former University of Georgia head football coach, Vince Dooley, had just been selected as the recipient of the American Football Coaches Association Amos Alonzo Stagg Award.
In local sports news, Schley County Lady Wildcats softball team had just secured themselves a spot as the number-one seed in the upcoming region tournament.
The community was deep in the throes of football fever, with two undefeated teams in Sumter County and many other teams in the surrounding area showing tons of promise in the young season.
One of those undefeated teams was, of course, the Americus High School Panthers.
As the Panthers prepared to kick off Region 1-AA competition, the ATR published the names of some of the top players in the area. Franako Smith, of AHS, was mentioned as the third most productive rusher in the area, having amassed 263 yards on 45 carries up to that point and crossed into the end zone five times to lead the pack. Only two players in the surrounding counties had racked up more yardage on the ground than Smith, Julius Banks (of Tri-County) and Quincey Hayes (of Sumter County), though neither of those players came close to Smith’s scoring record. AHS’ Joe Bruce was also mentioned in the table, having covered 185 yards on 29 totes. 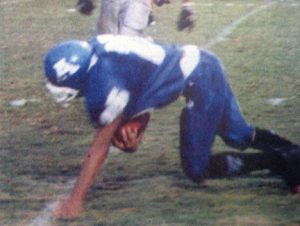 ATR FiILE PHOTO TAKEN BY NICK STALLINGS:
Published in the Sept. 21, 2000 edition of the Times-Recorder, this photo was titled “SCORING MACHINE”. The original cutline reads: Franako Smith has scored seven touchdowns for the No. 4 Americus High Panhtersand has 373 yards total offense in his senior season.

AHS’ Robert Johnson was, by far, the leading passer in the area, having connected on just under half of his passing attempts (31 of 66) for 582 yards covered through the air. By this point, Johnson’s passes had also found five Panthers in the end zone.
John Harris was leading the Panthers in receptions with 11, which spanned 176 yards. Leonard Pope followed closely, having pulled in eight passes for 138 yards and two scores and Smith earned a mention in the table once more by catching six footballs for 110 yards (and a pair of touchdowns, bringing his total on the season up to that date to seven)
————————
On Sept. 22, 2000, ATR sports editor, Matthew Brown, included an article titled, “Area football games still on… for now” in the sports section of the Times-Recorder.
In the piece, Brown discussed the potential impact that Tropical Storm Helene, which had been dominating the news for several days, might have on the weekend’s gridiron action.
The Panthers were scheduled to head to Dawson to take on newcomers to Region 1-AA, the Terrell County Greenwaves that afternoon and, at press time, coaches from every school in the area were wondering whether or not their teams would be able to compete.
As it turns out, the storm passed right through South Georgia, assuaging the teams’ fears that they could be rained out, but a special “Air Raid” half-time presentation scheduled for the Terrell tilt, which reportedly involved parachuters, had to be cancelled.
A little rain couldn’t dampen the Panthers’ spirits, however, as the AHS team would soon get the chance to show their Terrell neighbors just how tough they really were. In the Region 1-AA opener, the AHS squad saw seven different team members score touchdowns while the team’s defense held the Greenwaves to negative 25 net yards. The pummeling left the Panthers on the business end of a 48-0 decision. The Americus squad covered 174 yards on the ground in the tilt.
An article credited to “Staff Reports,” in the Sept. 24 edition of the Times-Recorder titled, “Negative returns bring positive Panther results” gave the details of AHS’ performance.
“Quarterback Robert Johnson completed 11 of 16 passes for 177 yards…,” the article stated. “John Harris caught seven passes for 127 yards, and he scored the game’s first touchdown on a four-yard run.
“Freshman Jermaine Allen caught two balls for 36 yards, 32 coming on Americus’ second touchdown. Franako Smith was the leading rusher with 66 yards on six carries with one touchdown, a six-yarder for the game’s third score. Leonard Pope also got into the scoring column on a seven-yard reception. On defense, the Panthers had three pass interceptions.
“Irwin Rutherford returned one 35 yards for yet another touchdown. Smith and Eddie Robertson had the other picks. Chad Holt had 52 yards rushing from fullback with a two-yard touchdown, and his fellow fullback Kent Margin had a one-yard score. Jonathan Frye kicked four PATs, and Pope caught a two-point pass.”
AHS head coach, Erik Soliday, seemed pleased with the team’s performance and was quoted in the article as saying, “It was good to play a lot of folks and give them a chance to do things… It was good to spread it around… It was a tremendous job by the defense. When you hold a team to low yardage, you’ve done a good job. To hold them to negative yards, you know you did something right.”
Soliday went on to name defensive linemen, Eddie Sims and Tim Angrish, who had “spent the whole game in the Terrell backfield” as key factors in the Panthers’ blowout.
As soon as the thrill of the victory died down, the Panthers immediately began looking towards the team’s upcoming Homecoming test against the Randolph-Clay Red Devils.
The Panthers had suffered a 14-6 defeat at the hands of the Red Devils in the team’s 1999 homecoming match-up against Randolph-Clay. Naturally, the team was not looking for a repeat performance. 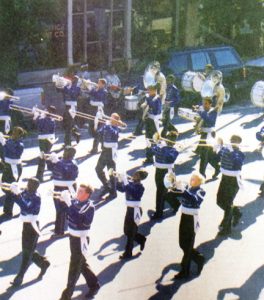