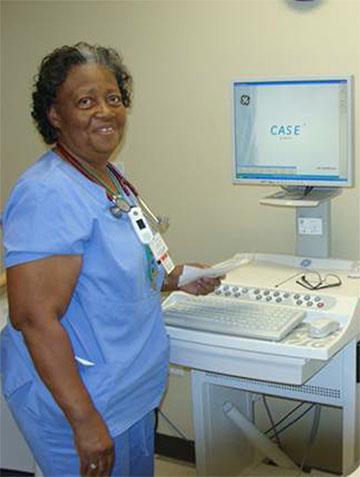 AMERICUS — It was 1967, and Evelyn Terry, a respiratory therapist at Phoebe Sumter Medical Center, received a call that would change her life forever.
“My sister-in-law called me and said they were hiring at the local hospital. She told me to hurry and I immediately went to apply for a position,” said Terry. That was the Americus-Sumter County Hospital which later became Sumter Regional Hospital, which was destroyed in the March 2007 tornado.
And, the rest is history. So years later, she is still employed at the local hospital and is a proud member of the Phoebe Sumter Medical Center family.
“I love my patients and I love being able to help them,” Terry said. “My goal is to give great care each time I interact with a patient, give them the respect and dignity they deserve. It is such a great thing when patients come back and say they remember when I used to be their nurse all those years ago. Many can’t believe I am still here after all these years! I have no plans of retiring anytime soon because I love what I do and I enjoy my respiratory coworkers, my Phoebe family and serving the people of my community.”