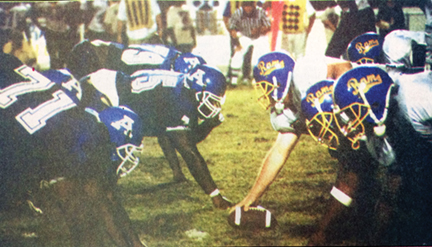 ATR FILE PHOTO TAKEN BY NICK STALLINGS: This photo, titled, “HOW THE BATTLE WAS WON” was originally published in the October 8, 2000 edition of the Americus Times-Recorder alongside an article on the Panthers’ rivalry match against the Sumter County High Schoo Rams. The original cutline reads: It was moments like these where Americus High seized control of Friday’s crosstown rivalry football game with Sumter County High at Finklea-Robinson Field. The PAnther defensive line kept the Rams going the wrong way most of the second half, led by Marcus Campbell (71), Warren Gooden (75), and Tim Angrish (79).

Editor’s note:
For the past three years, the Americus Times-Recorder has spent the summer months celebrating exciting periods in Americus and Sumter County’s history of athletic excellence. Recently, we began our latest run of articles in the “From the Archives” series, detailing the 2000 Americus High School (AHS) Panthers’ meteoric rise to the top of Class AA football in Georgia, in which the Panthers went undefeated throughout the season to earn a state championship victory.
In our latest installment, we discussed the Panthers’ 48-0 thrashing of Terrell County and the team’s Homecoming victory over Randolph-Clay before sharing some of the Times-Recorder’s previews of one of the Panthers’ most bitter rivalry tilts that they would play during the season. The Panthers were gearing up to take on the neighboring Sumter County Rams.
The Rams had gone undefeated until that point in the season, as had the Panthers.
As the two unbeaten teams prepared for their clash, the Times-Recorder was right there with them every step of the way.

By MICHAEL MURRAY
———————-
In the beginning of October 2000, the Summer Olympics were just closing and the American team was preparing to leave Sydney with more gold medals (37) and, for that matter, more total medals (93) than any other participating country.
In local news, the community was preparing for the annual Andersonville Historic Fair, which was expected to draw hundreds of people to the small Sumter County town. A little further up Highway 49, the Times-Recorder was reporting on the resignation announcement of Montezuma Police Chief, Lewis Cazenave.
In local sports news, the Times-Recorder was reporting that the Schley County Lady Wildcats softball team had just won the Region title with a defeat of Wilcox County, and would soon be headed to the Class A state sectional tournament.
As the temperatures steadily dropped to the point that many consider, “football weather”, people’s attention turned to the gridiron.
———————-
On October 6, 2000, the Times-Recorder published the third installment of its series titled, “The Clash of the Unbeatens”. This particular piece, penned by ATR sports editor, Matthew Brown, was subtitled, “Americus vs. Sumter County: The X’s and O’s”.
“The X’s and O’s of Americus High vs. Sumter County High on the football field this Friday have nothing to do with hugs and kisses,” the article began. “There will be handshakes and pats on the back at 8:00 in the first quarter and at 0:00 of the fourth, but in between will be the most brutal of chess matches.”
“Here are the easy numbers to remember: four and five,” Brown continued. “Americus is number four in the state with a 5-0 record. Sumter County is number five in the state with a 4-0 record. First place in Region 1-AA is on the line [as well as] bragging rights from one side of the county to the other.”
The article went on to say that the Panthers might have a slight advantage in the tilt as SCHS running back, Nate Sanford, had been sidelined two weeks prior with a broken leg. Sanford had been the leading rusher for the Rams in the previous season, the article explained. Fortunately, for the Sumter County crew, senior back, Quincy Hayes, had been more than happy to help carry the torch for the Rams and had stepped up his yardage production, breaking the 400-yard mark for the season the week prior.
“They have a good rushing attack,” AHS head football coach, Erik Soliday, is quoted as saying in the article. “It’s a bad thing that the kid got injured, but they have enough athletes to replace him. With all of the talent that they have, they don’t have any trouble replacing someone… Not only can Hayes and senior quarterback, Brian Davis, move the football on the ground, but Davis will look to get six foot six sophomore, Chauncey Hall, the football through the air.”
“Double team Hall, and a number of other Rams, including Chauncy Laster, can get open… You have to cover them all because they have a lot of skilled athletes at receiver,” Soliday continued. “You can’t leave one uncovered or they’ll burn you. They probably have as many skilled athletes as anyone in the state. You can’t pick one thing and decide you’re going to stop it… You have to be prepared for all of it.” 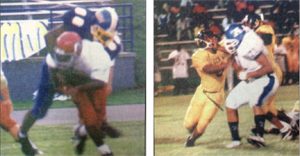 ATR FILE PHOTOS TAKEN BY NICK STALLINGS:
These two photos, titled, “A CHANCE AT EACH OTHER” were originally published in the Oct. 5, 2000 edition of the Times-Recorder, as anticipation of the AHS v. Sumter County match-up steadily increased. The original cutline reads: Chris Priott, left, of Sumter County High, and Marcus Campbell, right, of Americus Highhave had a lot of success against other opponents this season. Friday, they get to collide at Finklea-Robinson Field.

The article went on to say that, despite the fact that the Rams’ defense had lost some key players to graduation the previous year, several students had emerged to make a huge impact on the team’s performance in the young 2000 season, including John Gamble and Patrick Jones.
“They’re very good up front,” said Soliday. “They’re very good in the secondary. There’s no real weak spot to their defense. It’s pretty solid all the way around. They seem to have pretty good depth over there. Nobody’s hurt them a whole lot with different things… You have to really play mistake-free in this type of game. A turnover can be very costly and penalties can be very costly. You have to execute the game plan … anything negative can cost you.”
The article then turned its attention to SCHS head coach, Lloyd Brochu, who told the Times-Recorder, “One year ago, the Sumter Rams held a first-time starter, Americus junior, Robert Johnson, to nine passing yards. Since then, Johnson has won 10 of 15 starts and his numbers have improved dramatically.
“He’s a good athlete, and I think they’re a better football team now than they were back then,” Brochu elaborated in the article. “He’s really matured as a quarterback on the field. He’ll be a handful for us. What’s different from years gone by is they are letting their quarterback run the ball. It puts an extra dimension on what the defense has to be conscious of.
“The Panthers sure aren’t selfish when it comes to offense. Against Terrell County, seven different players had a touchdown, and against Randolph-Clay the number was five,” Brown added.
“They do a good job of moving the ball around, and I think the credit goes to Johnson,” Brochu continnued. “He reads the defenses and takes them out of audibles into plays that are good for them. We have to stay balanced as a defense and remember what our assignments are.”
“On the Americus defense, the first thing that stands out is the size on the line,” Brown continued. “That includes Tim Angrish, Eddie Sims, Marcus Campbell and an up-and-coming sophomore, Warren Gooden. Brochu is already conceding a size advantage to the Panthers, and that includes the Americus offensive line.
“The key to any football game is that the team that controls the line of scrimmage is going to win,” said Brochu. “It’s going to be a real challenge to our offensive line to match up against their defensive line. That ought to be the telling tale of the contest.”
“Looking at the Americus defense overall, the unit has had two games this season holding teams to negative yards of offense,” the article stated. “One of those was against a ranked Irwin County offense.” 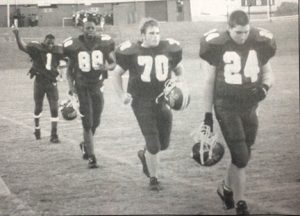 ATR FILE PHOTO TAKEN BY NICK STALLINGS:
This photo, titled, “SENIORS LOOKING FOR ONE MORE” was originally published in the Oct. 4, 2000 edition of the Times-Recorder along with an article discussing the upcoming match-up between the PAnthers and the Rams. The original cutline reads: Members of the Sumter County High School junior class want one more win over cross-town rival, Americus High School and one win on the Panther home field this Friday. Shown here during pre-game rituals are James Brochu (24), Alan Chadwick (70), Chris Piortt (88), and Brian Davis (1).