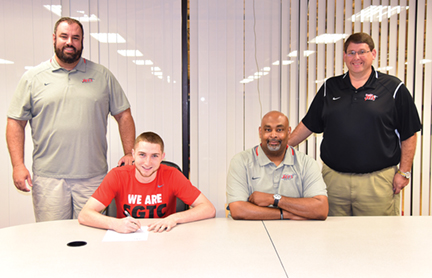 AMERICUS – South Georgia Technical College’s (SGTC) Patrick Welch, a sophomore member of the Jets basketball team which finished second in the Georgia Collegiate Athletic Association conference this past season, has signed a letter of intent to continue his basketball career as a Spartan at the University of South Carolina Upstate in Spartanburg, South Carolina, announced SGTC Jets head basketball coach Travis Garrett.
The 6’1” guard from Pembroke, New Hampshire played two seasons with the SGTC Jets and scored the game-winning basket to allow the Jets to advance in the NJCAA Region XVII end of the season tournament against Gordon College.
He played in all 33 of the Jets games this past season and started 29. He averaged 9.6 points per game and was listed as 13th in the GCAA in three-point percentage shooting. He hit 37.8 percent of his three point attempts.
Garrett, Assistant Coach Chris Ballauer and Athletic Director and Lady Jets Head Coach James Frey were on hand at the signing. “This was Patrick Welch’s top choice for where he wanted to continue his basketball career. I am very pleased that this worked out for both him and South Carolina Upstate. He has been a valuable member of the Jets squad and he will be hard to replace. He was a leader on and off the court,” said,” Garrett.
Welch recently received his Associate of Applied Science degree in Recreation and Leisure Management and will begin working towards his Bachelor’s Degree while at South Carolina Upstate.