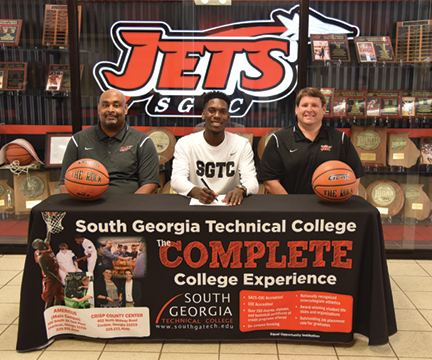 AMERICUS – South Georgia Technical College’s Ed Jones, a sophomore member of the Jets basketball team which finished second in the Georgia Collegiate Athletic Association conference this past season, has signed a letter of intent to continue his basketball career as a Hornet at Alabama State University in Montgomery, Alabama. The announcement was recently made by SGTC Jets head basketball coach Travis Garrett.
The 6’8” forward from Fairburn, Georgia led multiple games in points and rebounds. Garrett and Athletic Director and Lady Jets Head Coach James Frey were on hand at the signing.
“Ed made a great choice on choosing Alabama State University and I know he will make a huge impact on their program. Ed’s grandparents live in Montgomery, the same town as the University, which makes this decision so special. I am glad the school is close enough so I can attend a few of the games” said Garrett.
Jones recently graduated from South Georgia Tech with his Associate of Applied Science degree in Recreation and Leisure Management and will start working towards his next degree while attending Alabama State.
During his final season with the Jets, Jones was part of the team that progressed to the final round of the  NJUCAA Region XVII tournament.