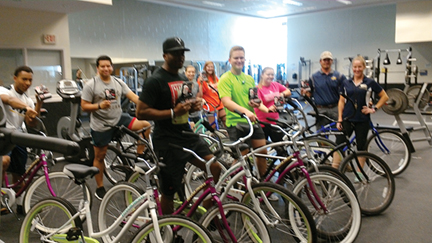 AMERICUS – Sumter Cycling recently provided Georgia Southwestern State University with headlights and tail-lights for its Bike Share program. The lights were obtained from Georgia Bikes, a nonprofit organization promoting bicycling and working to improve bicycling conditions throughout Georgia.  Anna Champion, Associate Director of Campus Recreation, Fitness and Wellness, heads the Bike Share program at GSW and stated that the increased visibility provided by the lights will enhance safety for the students. The bikes were a gift from Cycle World in Albany.
Champion explained how the Bike Share program operates. Students and faculty members can come to the Fitness Center during its hours of operation (6:00 a.m. – 9:00 p.m.), complete a registration form and check out a bike for use on campus or for around town. A lock is provided along with a helmet and a bike safety handbook. Bikes must be returned to the center one hour before closing. Bicycle repair needs are conducted by GSW student, Terrell Hoffman.
When asked about the program’s success, Champion reported that since its inception in September 2016, more than one thousand bike rentals have been processed. Students are using the bikes as a way to get to classes, to pick up groceries in Americus, or simply to have fun. Champion was quick to point out, however, that the program would not be as successful without the dedication of her fitness center staff. GSW student, Christin Jackson, is program assistant, and is responsible for handling the day to day operations. Jackson stated that the Bike Share program has been a learning experience for her, especially witnessing how valuable and fulfilling the program is to students.  She added that the headlights will allow the students to use the bikes for longer periods of time, particularly as the days get shorter.
Jodie Arrington, a junior sports psychology major at GSW, discussed how the Bike Share program has impacted campus. “It helps to bring students out of their dorm rooms and get them more active and healthy.” He further added, “the headlights will help drivers see the bikes and will provide a better safety option. We needed them.”