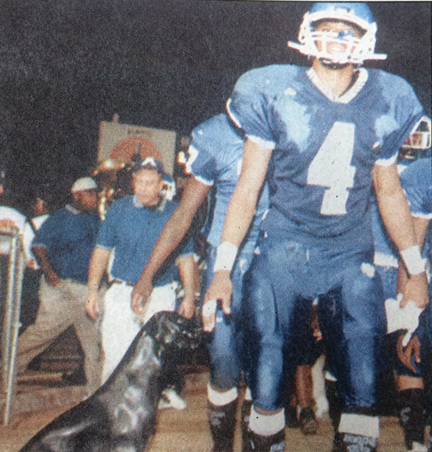 ATR FILE PHOTO TAKEN BY NICK STALLINGS: This photo, titled, “NEW TRADITION”, was originally published in the Nov. 30, 2000 edition of the Times-Recorder. The original cutline reads: John Harris (4) gives the Americus High Panther mascot a rub prior to the second half of Americus’ playoff win over Brooks County. All players touch the feline statuette during football Friday nights.

Editor’s note:
We, at the Americus Times-Recorder (ATR), are nearing the end of our trip down memory lane as we celebrate the Americus High School (AHS) Panthers’ exciting 2000 season in which the local squad plowed their way to a state championship victory.
Most recently in this summer’s “From the Archives” series, we dug into the ATR’s expansive archives to share the newspaper’s coverage of the Panthers’ initial victory in round one of the state playoffs; a 60-20 thrashing of the Brooks County Trojans.
With yet another blowout under their belts, the Panthers set their sights on the East Laurens Falcons, a tough team with their eyes on the same prize; the Georgia Class AA gridiron title.
Leading up to the match-up, one thing was apparent. The community, the fans, and the team’s opponents were all ready to see some action.
Most importantly however, the Panthers were ready to make their mark in Georgia High School football history.
————————-

“You have to cover everybody,” Soliday chimed in. “They run some things where they get those backs running around, and you have to make sure you have everybody accounted for… They have some fast kids and some fast receivers. They are going to match up with us pretty well speed-wise.”
Brown then recounted the Panthers’ tilt the week prior which saw Brooks County make the mistake of not accounting for the wide variety of AHS offensive talents, as the Trojans had attempted to apply double coverage to John Harris, only to leave Jermaine Allen open to pull in three passes and snag a pair of six-pointers. He added that “The tailback rotation of Franako Smith and Joe Bruce got more than 100 yards rushing and one touchdown from each, Bruce leading the way with 141.”
Fortunately, for the Panthers, East Laurens had yet to defend against the type of passing attack that AHS would present. 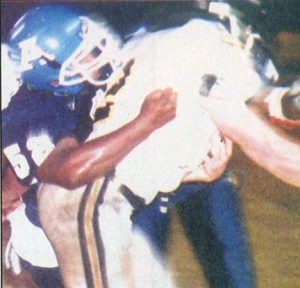 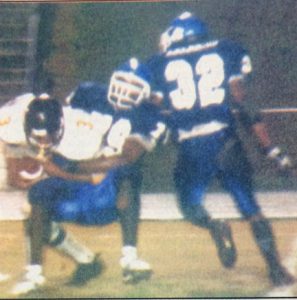 ATR FILE PHOTO TAKEN BY NICK STALLINGS:
The photos above were originally published in the Nov. 6, 2000 edition of the Times-Recorder with the title, “NOWHERE FOR THE FALCONS TO FLY. The original cutline reads: The Americus High football defense did it again totally shutting down an opposing offensive attack, this time against East Laurens High… [On top], linebacker Felton Johnson (52) wraps up Falcon Phillip White (2). [Bottom}, end Tim Angrish (79) finds Terrell Moore (3) behind the line of scrimmage.

“We hope that might be an advantage for us,” Soliday said. “But we are going to take advantage of whatever they give us. If they decide they want to take the passing game away, we’ll try to run it. If they decide they want to take the run away, we’ll try to throw it. Hopefully we can stay balanced.”
Brown took a step back from his usual expertly-executed in-depth analyses on Nov. 23, 2000; Thanksgiving, the day before the Panthers were slated to take on the Falcons.
“The school itself began its holiday break Wednesday, but there has been no break in the quest for that grand prize,” Brown wrote. “Still, how does head coach Erik Soliday keep his normally fit and trim Panthers from showing up on the football field Friday looking like a bunch of stuffed turkeys?”
In the article, Soliday reassured readers that the Panthers would be ready to rumble when the time came and that, after spending some quality time with their families, the members of AHS’ coaching staff would be ready to study game film and make some final adjustments to their attack strategy.
In concluding the article, Brown fittingly asked Soliday, assistant coach Chris Wade, and assistant coach Charles Truitt, what they were thankful for on the holiday before the match-up. Each of them expressed their gratitude for the successful season in which the Panthers had suffered only minor injuries and said that they were grateful for their families and good health.
On Nov. 24, the day of the second-round match-up, Brown got back to serious business, discussing the ins and outs of the upcoming game.
Brown kicked off the article, stating that the Panthers would love the opportunity to snap the Falcons’ wishbone formation the same way that so many wishbones had been snapped the previous evening around the dinner table.
He went on to say, “The Panthers have given up an average of 11 points a game and have held some teams to the red side of zero in total yards. Which Panther is doing the most damage? Take your pick.
“Defensive tackle Eddie Sims has the most total tackles with 84, 20 for a loss, and has 10 1/2 quarterback sacks. Linebacker Joe Bruce has 55 tackles and four sacks, and lineman Warren Gooden has 55 tackles, 12 for a loss. Also from the linebacker slot, Chad Holt has 49 tackles, four-and-a-half sacks, and six forced fumbles. Linebacker, Felton Johnson, was the big defensive star last week against Brooks County, intercepting two passes and taking both in for touchdowns. Franako Smith, who is a big yard producer at running back, has a team-leading four interceptions playing in the secondary, and he took one in the end zone against Sumter County. When talking about tackles for loss, end Tim Angrish is also up there with 12 and the other end, Marcus Campbell has nine.”
Brown also advised readers that there was a potential for inclement weather on the day of the game, an obstacle that the Panthers had been lucky enough to avoid throughout the season.
“The Panthers, on offense, do not rely on one method of moving the football, so adaptability to conditions should not pose a major problem, Brown said.
The following Sunday, on Nov. 26, Brown confirmed these earlier predictions in an article titled, “Panthers pummel Falcons”, detailing AHS’ win.
“Nothing, not fumbling the opening kickoff, not rain coming out of the sky, not a 100-yard disadvantage in penalties, could stop the march of the Americus High School football team Friday night,” Brown wrote.
“Quarterback Robert Johnson and receiver John Harris connected three times for touchdowns as the No. 3 Panthers smothered East Laurens High 48-0 in a Class AA state second round at Finklea-Robinson Field…
“Even though he was sacked three times and had to scramble from sideline to sideline at times, Johnson got off 22 passes with 14 completions for 245 yards and four touchdowns.
“Harris had half the receptions, seven, for 162 yards. A 244-yard team rushing effort was bolstered by a 76-yard end-around touchdown run by freshman receiver Jermaine Allen…
“The Panther defense only gave up two double digit running plays to East Laurens’ wishbone attack, both of those coming in the first quarter. The Falcons had just 31 rushing yards in the game and 36 passing while losing three fumbles. 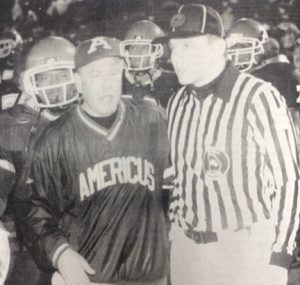 ATR FILE PHOTO TAKEN BY NICK STALLINGS:
The photo above, was published in the Dec. 1, 2000 edition of the Times-Recorder. The original cutline reads: Americus High head football coach Erik Soliday (above) briefly chats with an official after the second round state play-off win over East Laurens… In that game, the Panthers were penalized 15 times to just once for the opposing Falcons.