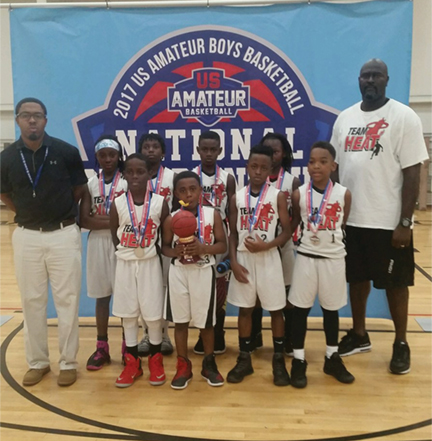 SUBMITTED BY ERNEST SCOTT: Members of Team Heat pause for a photo with their awards after the Hoopseen Amateur AAU National Tournament.

ATLANTA – Team Heat, a nine-and-under member team of the Amateur Athletic Union, took second place in the 10-and-under Hoopseen US Amateur AAU Nationals Tournament on July 2, 2017 at Suwanee Sports Academy in Atlanta.
Team Heat’s Amari Hubbard finished fourth in the Hot Shot contest with 15 points and Javoris Scott finished in first place in the three-point shootout, sinking 11 of 15 attempts from beyond the arc.
Team Heat wrapped up their 2017 season with three Georgia Cup championships and a runner-up trophy from the national tourney.
The players also got a chance to meet Carlos Boozer, who played with the Chicago Bulls and Kevin Wills who played for the Atlanta Hawks.
Teams came from all over the Southeast United States to participate in the event.
Team Heat will be holding tryouts for next year’s team soon. According to a recent press release from head coach, Ernest Scott, parents interested in enrolling children on the 11U travel team can contact him at 706-473-3850 for more details.