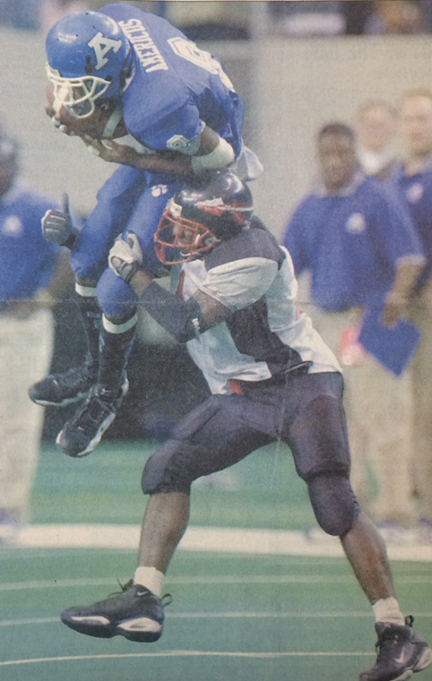 ATR FILE PHOTO CREDITED TO THE ASSOCIATED PRESS: This photo, titled, WALKING ON AIR” was originally published on the front page of the Dec. 10 2000 edition of the Times-Recorder. The photo’s cutline reads: Americus freshman, Jermaine Allen, goes high over a Charlton County defender for a catch.

Editor’s note:
The end is drawing near.
As the Americus Times-Recorder has looked back at the 2000 Americus High School football season for this summer’s “From the Archives” series, the ATR has, so far, chronicled the Panthers’ victories through the quarterfinal round of the state tournament. While digging through our archives, we have shared articles detailing one of the most exciting athletic periods in recent history in Americus and Sumter County, as the panthers rolled over opponent after opponent in their campaign for the state title.
Most recently, we shared the details of the Panthers’ quarterfinal victory, a 28-14 rout of the Northgate Vikings, leaving the AHS crew with only two foes standing between them and the most prestigious award in Georgia high school football.
On their journey to the title bout, the Panthers would need to defeat another talented team which sported a 12-1 record; the Charlton County Indians.
This tilt would take place on the big stage; the Georgia Dome in Atlanta before thousands of fans watching both in person and on television.
————————

By MICHAEL MURRAY
In early December of 2000, the town of Americus was beginning to get into the holiday spirit. The city was adorned with lights and holiday decorations. Young children were making sure to mind their P’s and Q’s with a potential visit from Santa Claus right around the corner.
In national news, baseball sensation, Aaron Rodriguez, was reported to be in negotiations to sign a $250 million contract with the Texas Rangers; an amount totaling more than twice the previous record for the highest contract ever signed in the MLB. During that period, 28-year-old Florida State quarterback, Chris Wienke, became one of the oldest players ever to be awarded the Heisman Trophy after leading the Seminoles to their third national championship appearance.
The trial of Oklahoma City bomber, Timothy McVeigh, was nearing a close after he waived his right to further appeals. At the same time, media giants, America Online and Time-Warner had just announced a merger that would be hailed as the largest media deal in U.S. history.
On the local front, the ATR’s pages contained articles on the upcoming opening of a new Krystal restaurant and the local Board of Education’s proposal to set aside $46 million in SPLOST for their plans to begin construction on a new school building.
Throughout every issue of the Times-Recorder, there were local advertisements and fan letters wishing the Panthers luck and expressing the community’s pride in the team.
It seemed that what the city of Americus wanted most for Christmas was a big, shiny trophy.
————————
On Dec. 8, 2000, the Panthers lit up the dome against the Indians in a tilt that was chronicled in-depth in the Dec. 10 edition of the Times-Recorder. The front page of the edition was decorated with a huge photograph of AHS team member, Jermaine Allen, making an exciting catch with the caption “Perfect Panthers one game away from championship: STATE TITLE SHOT”.
Below this photo was a brief article titled, “Plans underway for state championship showdown” by ATR sports editor, Matthew Brown.
“Americus High football fans, putting on a show for a statewide television audience, stretched from one goal line to the other and waved cards and posters and signs stating what they want for Christmas,” the article started. “And they all want to know, ‘Who’s next?’ A better question may be, ‘Who cares?’’ Brown added, insinuating that the identity of the Panthers’ opponent in the upcoming title bout was likely irrelevant because the team had barreled past every foe up to that point and certainly wouldn’t cut their enemies any slack the following Saturday. At that point, the Panthers felt like they could take on just about any team. 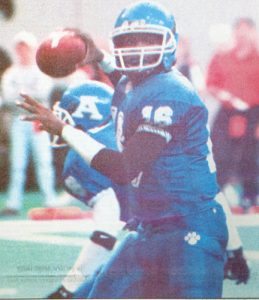 ATR FILE PHOTO TAKEN BY DAYTON P. STRICKLAND:
The above photo was originally published in the Dec. 10, 2000 edition of the Times-Recorder. The cutline reads: Americus High School quarterback, Robert Johnson looks to the right and goes back to throw a pass to Jermaine Allenin the end zone. Allen caught the 3-yarder in a historic moment at the Georgia Dome in Atlanta, for it was the state record 36th touchdown throw for the season.

“Not since the St. Louis Rams stopped the Tennessee Titans just short of the goal line at the end of Super Bowl XXXIV more than 10 months ago has the Georgia Dome seen such drama,” Brown continued. “Lady Luck came off the bus with the Americus Panthers, 20-14 Class AA semifinal winners over Charlton County High Friday to make the first experience for these high school kids on the artificial turf one to remember for the rest of their lives.
“Who will remember it the most? How about senior quarterback Robert Johnson,” the article continued. “The athlete who followed the holder of three state records, Fabian Walker, in that signal-calling position at Americus is guaranteed to finish his career with a state mark of his own. With a 3-yard slant pass to freshman Jermaine Allen, Johnson recorded his 36th touchdown pass of 2000, a new Georgia prep record.”
“It feels good to win in the Georgia Dome and break the state record,” Johnson is quoted as saying in the article, listing the accomplishments of the day in order of priority.
Brown went on to write that, despite taking a few hard hits from Charlton defenders and seeing his team trail the lead twice in the tilt, the Panthers had prevailed and Johnson inched closer to another record after completing 15 passes for 226 yards.
On page one of the sports section, ATR sports editor, Matthew Brown, penned an article titled, “Smith scores winning TD in record-setting semifinal win”, discussing the semifinal game’s action.
“Franako Smith’s 1-yard plunge into the L end zone with 4:43 remaining made the difference in an historic day of high school football at the Georgia Dome Friday,’ the article began. “Smith and the No. 3 Americus High School Panthers nudged out the No. 1 Class AA ranked Charlton County High Indians 20-14 in the state semifinals…”
He went on to write that the Panthers would be taking on the Washington-Wilkes Tigers the following Friday in Americus to determine who would claim the state’s top prize.
“Another part of this day belonged to senior quarterback, Robert Johnson,” Brown continued. “The 6-foot-3 signal caller put his name on top all by itself in the state’s single¬-season touchdown passes column. He did it in the first quarter on a 3-yard slant pattern to freshman Jermaine Allen, and it came with Americus trailing for the first time in over two months, 7-0.
“Johnson also put himself 140 yards closer to his former teammate, Fabian Walker’s, record for single-season passing yards. With an unbelievable amount of luck as well as some tremendous athleticism from receivers like Allen and John Harris….
“Harris himself hauled in seven catches, which cut what he needed to tie a single-season state record in half, for 135 yards. That puts him a mere i35 yards away from tying yet another record during the state finals.”
Brown went on to praise the Panthers’ defensive performance in the semifinal tilt, saying that the AHS line had held the Indians to only 119 yards on 41 rushes. Charlton’s Lamar Williams had been the Indians’ main yardage-earner, covering 54 yards on 13 totes.
“The Indian offense scored just one touchdown, and that was on its first series,” Brown added. “The other points came on an interception return by Harold Hannans, which again put Americus behind in the count.
“Sacking [Charlton] quarterback Barna Adams (committed to the University of Georgia) in the second half were sophomore end Tim Moore, linebackers Joe Bruce and Chad Holt and senior end, Marcus Campbell.”
Following the victory, AHS head football coach, Erik Soliday, told Brown, I guess if you’re going to be a good football team, everyone has to take turns stepping up,” about the contributions of younger players like Moore and Allen.
“I can’t give our coaches on defense enough credit. The kids learned the game plan and executed what they do well and took away their best stuff.
“I don’t know if everybody in this Dome can hem (Adams) up in the comer, he’s so quick. We were fortunate enough to keep him from getting first downs. I think that was the biggest key in the ball game.”
“Johnson wasn’t thinking about passing records on the ensuing Panther drive when he scrambled 52 yards on the turf to the Charlton 19,” Brown continued, detailing the Panthers’ initial scoring drive. “He…hit tight end Leonard Pope for first-and ¬goal at the 3. The next snap resulted in the record TD strike to Allen.”
Brown wrote that, after AHS place kicker, Jonathan Frye, nailed the PAT, the Indians would not see the opportunity to consistently threaten the Panthers. 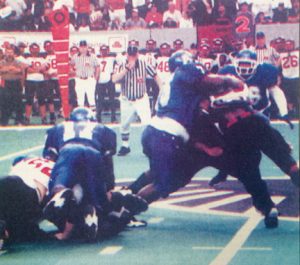 ATR FILE PHOTO TAKEN BY DAYTON P. STRICKLAND:
The above photo was originally published in the Dec. 10, 2000 edition of the Times-Recorder. The cutline reads: As big as Johnson’s performance was, the play of the AM ericus Panther defense was just as important in the 20-14 win over No. 1, Charlton County in the Class AA semifinals. Warren Gooden(75) [above], corrals a Charlton runner near the Atlanta Falcon logo as linebacker, Joe Bruce (26), comes in for assistance and Tim Moore (17) has some other players pinned down.