Weaver to students: Don’t be afraid 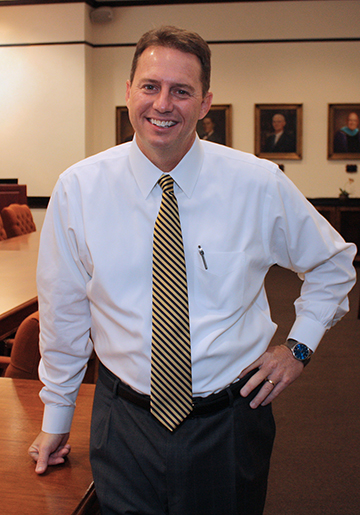 Neal Weaver has been on the job as president of Georgia Southwestern State University since July 15.

AMERICUS — Neal Weaver may have taken a circuitous route to find what he was meant to me — a leader — but his story provides a useful message for today’s young people: There’s nothing wrong with being unafraid, stepping out there, and experiencing different paths before you find the right one.
Weaver, who took the reins as president of Georgia Southwestern State University (GSW) on July 15, shared his story recently with the Americus Times-Recorder. And listening to it was a pleasure.
Weaver sat down with the T-R in his office at GSW with country music playing in the background. This makes perfect sense being that Weaver was born in Paris, Texas, and lived in Muscogee, Oklahoma, and other places before returning to Oklahoma.
When Weaver was asked about his first impressions of GSW, he expressed his appreciation for the community, the campus and the faculty.
“The community of Americus is unbelievable. It’s a super place to be and live, but the people are so nice and supportive, which has certainly made it nice for me,” said. “The campus itself is a beautiful place. The buildings, the grounds are well designed, well maintained, and create a real environment of a college, a university, the old, very nostalgic, traditional college setting. … the big green spaces, the tall trees. It’s really appealing to me and to the traditional part of me.”
Weaver also said he was surprised, although he said he hated to use that word, by the “quality and strength of the faculty.”
“It shouldn’t be a surprise, but there’s a lot of strength and power and quality in that group and I’m really excited to kind of turn them loose and let them really get to work and see what they can do to help develop the university in our future,” he said.
Weaver was also asked to talk about his vision for the university.
“When you ask that question,” he said, “a couple of things come to mind. One: it would be awfully presumptuous of me to come here, and in week three tell these people, who have been here for years and years and years, ‘this is what we’re going to do.’ So, I’m trying not to impose any of my past activities onto an institution that I don’t know very well.
“Second, the university does have a strategic plan that was recently completed, and I’ve been very pleased with what I’ve seen in it. And it tells me what they want to do, and I hope one day pretty soon I stop saying ‘they’ because it’s ‘us’ now. … That was the plan that the campus put together and now that’s my plan and our plan, and we’re going to work that plan because there are some great things in there and I think it lines up really well what the expectations are for this university from the Board of Regents, from the Chancellor, and certainly from me. So, we now have a nice road map and … that’s a powerful tool.”
Weaver revealed what his focus will be over the next semester and year as he gets to know more about the institution.
“One is putting the students first and making sure the decision, choices, policies and procedures that we’ve put in place are helpful to the students, and allow them to be successful here in the campus and at GSW,” he said.
“Second, we want to be aggressive in our innovation. We’re going to recognize and encourage, reward innovative ideas and innovative thinking around the things that we do as an institution … Not just our academic program but the way we program in our residence halls or the way we provide co-curricular support for our students, the way we do international programming, all sorts of areas we can be innovative and creative at. We’ve done some here at the university, but there’s more to do.
“And finally, we’re going to focus a lot on growing, strengthening and expanding the GSW community. And when I say community I don’t talk simply about the campus. I really believe that we have to be more connected, more tied to the local economy and the local community. We want to have people on campus,” he said, adding that there are myriad activities on campus for the entire community such as athletic events, plays, student activities and cultural events, lectures, etc., “and we want people from Americus and the surrounding communities to come and be a part of the campus and our community. Just as they come onto the campus and engage in our life as an institution, then we need to be getting off-campus and involved in the economic development of the community … the cultural enrichment of the community … the activities and happenings … in and around us so that we are a seamless part of what goes on in the area.”
Weaver hopes that focusing on these three areas will result in a better understanding of the institution, “and maybe someday, a more succinct vision.”
Weaver knows that the story of GSW needs to be told, again and again, and well.
“It’s very important to me that no one in the state, in the region, when their son or daughter brings them a Georgia Southwestern brochure, says, ‘They’re terrible; don’t go there.’ The way we do that is by telling our story, and they may not know why they have a positive impression of us but if they read stories in the newspaper about a faculty member who’s a got relationship with a university in China, that’s part of our story.” 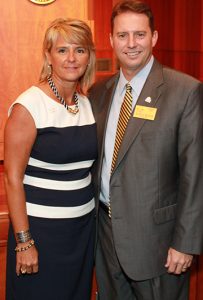 Kristi and Neal Weaver will be making their new home in Americus.

Weaver was excited about a new institute that will open on campus in the near future, something that was supposed to be housed at a large institution which backed out. He said it will have “an incredible exchange of cultural art and discussions of their democracy and their democracy, and help them to develop a voice that’s not controlled by their state … So many incredible things. If we tell those stories and tell them well and enough, then when a parent hears ‘Georgia Southwestern,’ they’ll say ‘Yes, I’ve been hearing good thing about that.’”
Weaver’s first job after he graduated with a degree in speech/communications from Oklahoma Panhandle State University was as a reporter at a daily newspaper in McAlester, Oklahoma. He said he had hoped to ultimately become a sports writer and sports caster. After a couple of months, he became a sports reporter but soon found that work took the pleasure out of sports. So, he resigned and went to work as a lifeguard. “That can only last until the end of the summer,” he said with a laugh. A mother of one of his swimming students took a liking to Weaver and asked what he had planned for after the summer ended. She was the secretary to the president of the university and introduced Weaver to the PR guy. Weaver was hired to produce a TV show for the university. He said he hung around and they kept paying him, so he stayed.
“A lot what I tell students is to not be afraid,” he said. When he was first asked if could produce a TV football coaches’ show, he said sure. He had taken one class in video production and editing. He said his first show was “just awful,” but he got better and better at it. He had to step out and learn to do it through experience.
He went to Oklahoma City to work for a major technologies corporation but found he was miserable in the factory environment. He missed being on campus and the students, “the pageantry, the football games, the basketball, the plays, the concerts. You just don’t have that at a factory,” he said, laughing again. That seems to be one of Weaver’s characteristics. He sees humor in life, and his laugh is infectious.
That’s when he decided to go back to school and get serious about what he really wanted to do. He holds a doctorate in organizational leadership from the University of Oklahoma in Norman. He earned a master of business administration from Southeastern Oklahoma State University in Durant.
Weaver comes to Americus from Nicholls State University in Thibodaux, La., where he was vice president for university advancement and innovation.
Prior to joining Nicholls State, Weaver served West Texas A&M University (WTAMU) in Canyon as vice president for institutional advancement and executive director of the WTAMU Foundation. He has also served in previous roles as vice president for university relations, director of university relations and director of public relations at Northeastern State University in Tahlequah, Okla.
He and his wife Kristi have three sons, all of whom are in college. Weaver enjoys country/western music, golf, sports, and watching his sons play sports.