AMERICUS — As the buzz about Monday’s solar eclipse reaches fever pitch, Georgia Southwestern State University (GSW) has plans in place that will allow anyone who can access YouTube to watch the eclipse safely. That is, if weather conditions cooperate. If it is cloudy, it won’t matter.
At GSW’s Centennial Park, Svilen Kostov, Ph.D., will be onsite from 1 p.m. until the eclipse ends a little after 4 p.m. on Monday. Safety glasses will be available for shared usage and other methods viewing as well, such as a pin-hole camera. The public is invited.
For those who don’t wish to go outside, GSW will be broadcasting live from the Agerton Observatory via GSW’s YouTube channel, found at https://www.youtube.com/GeorgiaSouthwestern.
The broadcast will last from 1-4:15 p.m.
Sam Peavy, Ph.D., professor of geophysics and environmental geology at GSW, says that safety is the primary concern during this celestial event. Totality will be a little less than 92 percent here, he said.
“Millions of people are going to be looking at this thing,” he said, “and they’re going to be unwittingly doing bad things to their eyes. Even these glasses say ‘do not use with any other optical equipment or eyeglasses.’ And ‘do not use if scratched.’ Finally, it says, ‘limited to three minutes of continued use over several hours,’ which means you look at it, you gaze at it for a few minutes. You don’t stare at it for three hours. That’s just crazy. You are going to damage your eyes. Even with good glasses; you can’t do it.”
Peavy suggested the following link https://eclipse2017.nasa.gov/sites/default/files/interactive_map/index.html which includes all kinds of information relative to the eclipse and an interactive map. Another is https://eclipse2017.nasa.gov/ which also includes safety information.
Eclipses have been occurring since the beginning of time, and since the earliest days of recorded history, as early as 1223 B.C., astronomers sought to learn about the phenomenon. Chinese historical records include solar eclipses dating back more than 4000 B.C. and by the 1600s, European astronomers had published books about eclipses. (Wikipedia)
In ancient times, people were superstitious of such celestial events. If the sun disappeared in the middle of the day, people thought it was gone forever and mayhem ruled. But as the sun “returned”, the people gave thanks to whatever deity they worshipped.
Today, eclipses, both solar and lunar, but more so the former, are huge events and a reason to party.
Popular culture has long embraced the eclipse. Meatloaf wrote a song about a “total eclipse of the heart” while Pink Floyd titled one of its albums “Dark Side of the Moon.” Carly Simon sings that her self-centered ex-lover flew his “Lear jet up to Nova Scotia to see the total eclipse of the sun.
Poor Cat Stevens, prior to his change of religious beliefs, was being followed by “a moon shadow.” And there are many other examples. Just Google “eclipse songs.” 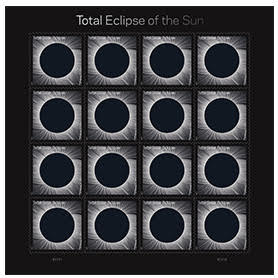 The U.S. Postal Service has also gotten into the spirit by producing a commemorative “forever” stamp that is heat sensitive. The stamp has a blacked out sun depicted on it and when you put your thumb over it, it changes to the moon’s surface. When heat is withdrawn, the image returns to its blacked out phase. 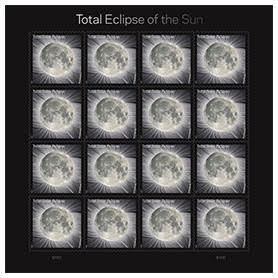